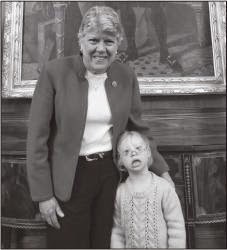 by Anna Bitong from Thousand Oaks Acorn:
Six-year-old Brianna Pitzele, who was born with Down syndrome, stood on the floor of the House of Representatives earlier this month and cast the final vote to pass the Achieving a Better Life Experience (ABLE) Act, which will allow people with disabilities to save money without losing government benefits.
Brianna’s father, Brad Pitzele, who advocated strongly for the bill, watched on Dec. 3 as his firstborn cast two votes in favor of the law on behalf of U.S. Reps. Julia Brownley and Cheri Bustos of Illinois, where Pitzele lived before moving to Thousand Oaks. The legislation passed overwhelmingly, 404-17, winning bipartisan support.
“I was overcome with joy,” Pitzele said. “There were tears streaming down my face. I was smiling and waving at her. She was blowing kisses at me and yelling ‘Daddy!’ from the floor up to me in the mezzanine.”
Following its success in the House, the bill was passed by the Senate on Dec. 16. President Barack Obama has 10 days from that date to sign the bill into law.
Pitzele and his daughter were invited to Washington, D.C., to witness the bill’s passage by the National Down Syndrome Society, which last year gave Pitzele the NDSS Down Syndrome Ambassador of the Year/Champion of Change award.
Currently, people with disabilities cannot have more than $2,000 in savings to be eligible for Medicaid and Supplemental Security Income from the Social Security Administration.
Pitzele, spurred on by his own situation, sought to change that.
With the ABLE Act, people with disabilities can put up to $14,000 a year into a tax-free savings account and still be eligible for Medicaid and SSI.
Similar to college and health savings accounts, these new accounts can be used to cover basic needs like education, healthcare, transportation housing and other expenses.
“On day two of (Brianna’s) life they were telling us she could never have any savings,” Pitzele said. “You’re forced into a life of poverty. I made a promise to her that we would fix it.”
He kept his promise, sending hundreds of emails and making phone calls to California politicians asking them to back the ABLE Act.
“Brad has done phenomenal things,” said Mark Priceman, spokesperson for the Down Syndrome Society. “He has taken it to a completely different level. He had a huge part in getting most of the California delegation in the House of Representatives and both senators to co-sponsor the ABLE Act.”
Pitzele said Brownley was immediately receptive to his pleas and invited Brianna to the House floor on Dec. 3.
“We have 53 Congress people and two senators in the state. I probably emailed every single one of them every month,” Pitzele said. “I found that for every 10 emails I sent, usually I could get one positive response.”
About 30 years ago, the life expectancy for people with Down syndrome was 25 to 30, Priceman said. Now many are living into their 60s, sometimes outliving their parents.
“TheABLEAct doesn’t do anything except help people,” Priceman said. “It’s not a burden on the taxpayers. It’s just a way for people to have financial independence and to be able to save for their futures.”
Pitzele agreed.
“I see (the ABLE Act) as a huge change in that now she has the opportunity to gain greater independence,” he said. “It’s not enough money to live well, but it’s a step. Hopefully we can improve things even further.”
Pitzele called his family’s trip to the nation’s capital, paid for by NDSS, “a trip of a lifetime.”
“To see the leaders of our country interacting with (Brianna), seeing her value, respecting her. That means a lot.
“Folks with Down syndrome today are driving cars, getting married, going to college and getting jobs. I’d like to see that trend continue. My hope for her is that she can lead a life that she feels like she’s fulfilled and that she’s contributing to society in a meaningful way.”
Posted by DSD at 3:00 PM