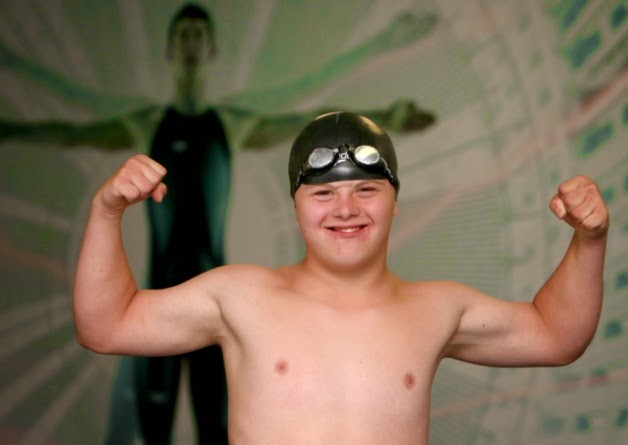 from Chad:
UK - Three senior figures from Nottinghamshire-based Skills Holidays are ‘pedalling for pesos’, to help Blidworth swimmer Oliver Pratley take part in the Down Syndrome World Championships in Mexico this November.
Oliver (19) has already broken seven junior world records and nine European records and was breaststroke World Champion in 2012.
Now Oliver’s mum, Helen, and their supporters have to raise the £2,500 needed for him to attend the championships.
They have already raised £1,900 towards that amount but need a further £600.
Skills Chairman Nigel Skill and fellow Director Simon Skill, along with Holiday/Commercial Manager Martin Laver were so impressed with Oliver’s achievements to date that they wanted to help raise the remaining cash needed through a sponsored cycle ride tomorrow (Saturday).
The team will be setting off on a 50-mile round trip starting from Oliver’s home town of Blidworth, heading towards Newark, before turning north and travelling around Sherwood Forest and finally returning to Blidworth.
Helen Pratley said: “Unlike with the Paralympic teams, there’s no major sponsor to support swimmers with Down Syndrome.
“That means that all the UK competitors have to raise their own funds to take part in the World Championships.”
“Oliver and I are really grateful to Martin, Nigel, Simon and everyone from Skills for their support. “The competition means so much to Oliver and he trains extremely hard, but mostly he just loves competing against other young people of the same ability. He’s got that winning instinct and is already geared up and ready to go!”
Martin said: “Oliver obviously works so hard for his swimming success – this seemed like the least we could do to help.” Nigel, Simon & Martin will be doing their bit on Saturday.”
If you’d like to make a donation please send a cheque made payable to ‘Skills Holidays’ to Skills Holidays, Belgrave Road, Bulwell, Notts, NG6 8LY. Please write ‘Pedal for Oliver’ on the back of the cheque.
Alternatively, telephone Skills Holidays on 0115 9777 080 and make your ‘Pedal for Oliver’ donation.
Posted by DSD at 6:00 AM