So why do some people act so weird around me? 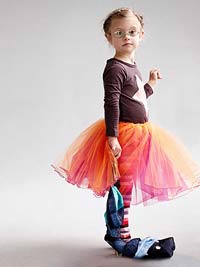 from Ladies Home Journal by By Hallie Levine Sklar:

Hi, my name is Johanna. I'm 4 years old and I have Down syndrome.I love to dance and swing on swings and play with my dog Ivry. Mommy and Daddy think I'm a pretty cool kid. So why do some people act so weird around me?
"Your son is adorable," exclaimed the elderly blonde. I was standing in our neighborhood park, watching my 23-month-old son, Teddy, pretend to steer a miniature bus. He sat next to another little boy who looked about the same age; they were banging on pretend horns and yelling "beep beep" while ignoring each other in typical toddler fashion. I suspected the woman was the boy's grandmother. She kept bobbing her head and smiling, that broad benevolent grin adults sometimes get when they're not quite sure how to interact with little kids.

"Thanks," I said. I felt sticky warm fingers and turned around to see my daughter, Johanna, then 3, holding on to my legs and grinning.

"Why hello, you," I said, smiling down at her while silently berating myself for letting her walk out of the house looking like such a disaster. She'd woken up grouchy from her nap and wouldn't let me fix her blond ponytails, which sagged despondently like demented bunny ears. She had smears of chocolate all over her mouth and her pink dress, remnants of the brownie she'd eaten in the car on our way over, and her nose was running.

I was about to take out some wipes to clean off her face when I noticed the woman staring. This happens quite a bit with Jo Jo, who has Down syndrome. Most of the time it doesn't bother me when strangers look at my daughter -- their gaze often seems more curious than anything else.
But that day my stomach tightened. The woman was looking at my daughter with bewilderment and horror, as if a chimpanzee had somehow managed to wander into the kiddy park. It was unnerving, but I reminded myself that as the mother of a newborn (my 5-week-old was sleeping in a stroller beside me), sleep deprivation might've made me paranoid. I decided to give her the benefit of the doubt.

"You've got a cute little guy there yourself," I said, pointing at the boy next to Teddy. "Is he your grandson?"

"Yes," she said quickly. She was trying to keep her face expressionless, but her eyes gave her away: They were darting over nervously to Jo Jo. There was a long moment of uncomfortable silence, which the woman broke by nodding at Teddy.

"Your little guy is darling, just darling," she said again. "So handsome. Look at those huge eyes, and those long eyelashes! He's going to be a heartbreaker when he's older."

"Why hello there," the woman gushed. "Aren't you a pretty little thing. You're darling, just darling. Look at those curls! And that adorable big pink bow!"

I wondered about the reason for the woman's awkward behavior toward my daughter; maybe she'd never met a child with Down syndrome before. I put my arm protectively around Johanna, who had lost interest in us and was singing "Itsy Bitsy Spider," making gesticulating motions with her hands. "This is Jo Jo, my oldest," I said.

The woman looked at my daughter and said nothing. She refused to meet my eyes and instead stuck her hand in her purse and fiddled around, pretending to look for something.

I've seen that silent disdain before and I've dubbed it The Look. It's relatively subtle -- people don't overtly stare but let their eyes flick over my daughter dismissively before they turn their backs. If I'm introduced to them in the park or at a playgroup, they smile hello, give Jo Jo The Look, and then discreetly turn away. I saw The Look on a mom right before she told me she would pass on a playdate because she'd rather her twins be with "other kids who are at the same level developmentally."

There was the elderly woman at the mall who exclaimed, "How wonderful that you bring her out and don't just send her off to an institution!" Then there was my former coworker, who, when he saw Jo Jo, said, "She's so cute! You're lucky -- most kids with Down syndrome aren't." And the teenage lifeguard at the pool where our family swims, who thought it was okay to insult another teenager by calling him retarded. When I confronted him, he realized his mistake and apologized quite sincerely. "I think your daughter is adorable," the young man told me. "I wasn't thinking of her when I said it. Honestly." The Look is different. It feels as if the people who look at Jo Jo this way aren't even seeing her as a fellow human.

I comfort myself by rationalizing that these people just don't know Johanna and that if they spent a few hours with her they'd realize that in many ways she's just a typical little girl. She loves reading books and dancing around our playroom in her tutu waving her nana's old silk scarves.

Indeed, a few minutes after I walked away from that woman in the playground, the sting started to fade. Teddy and Jo Jo were on the big-kid swings, squealing as I pushed them higher and higher. Jo Jo arched backward and grinned at me. I took in all the details of her face: its beautiful heart shape, her wide almond-shaped hazel eyes, her rosebud lips. I squinted my eyes and examined her closely, trying to put myself in that woman's shoes and see what she saw -- a child with Down syndrome -- but I couldn't. All I could see was my beautiful, perfect child, Johanna.
Posted by Rick at 10:10 AM