Surf's Up for Down Syndrome 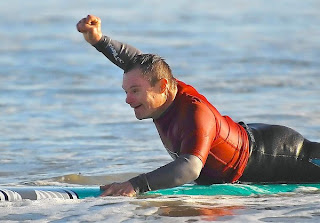 from Daily Pilot by Steve Virgen:

Scott McCall is no stranger to the water.

The 30-year-old grew up in Huntington Beach. He learned to swim at Pacific Sands Cabana Club with his sisters, Jayme and Megan. But McCall always wanted to surf.

He received special lessons at the Surf's Up for Down Syndrome event Friday. McCall was one of several potential surfers with Down syndrome learning from pros and experts near the Huntington Beach Pier.

Former Angels announcer Rex Hudler's Team Up for Down Syndrome, in conjunction with the International Surfing Museum, put on the inaugural event, which also featured live and silent auctions, as well as a banquet at Sandy's Beach Grill.

The sun glistening off the waves wasn't the only radiant scene Friday afternoon. There were smiles galore and laughter from amazement, as adults and adolescents with special needs rode waves.

McCall's father, John, said his son had tried surfing before, but had not been able to stand up. McCall stood up for a bit and caught some waves Friday, said Danny Nichols, his teacher.

"Scott killed it," Nichols said of McCall's sessions. "He did a great job. We paddled into a few waves. He stood up and had good balance. Out of eight or nine waves, he stood on five of them."

Nichols, a former pro who lives in Huntington Beach and owns a silk-screen T-shirt business, found out about the event from Brett Barnes, the owner of Duke's Huntington Beach.

Nichols said he was honored to help out and gained joy from working with people with Down syndrome.
John McCall said he was excited for his son. "I want to get him on the board so we can surf together," he said.

Hudler, a former Major League Baseball player who went on to become the Angels' color man, called the surfing portion of the event the highlight of the day.

Hudler and his wife, Jennifer, have four children. Their 15-year-old, Cade, was born with Down syndrome.

They watched Cade learn and try to surf with all his friends.

"I've been emotional the whole day to see the fun they had out here," Rex Hudler said, standing by the shore. "The typical kids showing them and how much fun they were having was also great. And to see that, given a chance, kids with Down syndrome can do anything. That's why I call it 'up syndrome.' It's not Down syndrome."
Posted by Rick at 12:03 PM