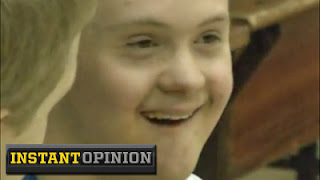 from NESN from John Beattie:

Rules are also meant to be broken -- that's what a lot of other people say. But what are rules, really? Rules -- particularly in sports -- are meant to keep people safe. They're in place to even the playing field and to allow each person, place or thing involved a fair shot.

Eric Dompierre wasn't born with an even playing field -- he was born with Down Syndrome. but he doesn't go home after school at Ishpeming High School to lament his handicap, he goes to basketball practice. At least he used to, according to UpperMichigansSource.com

Dompierre is being forced to sit out his upcoming senior year of basketball because of an age rule that the MHSAA has in place, stating that players over the age of 18 years old aren't allowed to participate in sports.

"I'd be sad if I couldn't play with them and not have them in my life. They want me to play, and I want to play with them," Eric said.

Dompierre and the Ishpeming school district have already submitted two revisions to the rule. Both have been denied.

"He gets a lot of his confidence from the fact that he gets in the games, and he has a lot of support, not only from people here in Ishpeming, but people from all over the area are supportive of him. If he's told that he's not allowed to play anymore, I think he's going to lose a lot of that confidence. And that's been a key to his development," said Eric's dad, Dean.

A third proposal is in the works as we speak. In the meantime, a petition has been launched by Change.com that you can sign (right now) to help this worthwhile cause.

Michigan doesn't have to look far for inspiration as Ohio's High School Athletic Association waives the age rule for students with disabilities. In fact, 23 other states allow students who suffer from disabilities to play high school sports after 18, as well.

So what's the hold up?

The MHSAA handbook has the rule in place for a reason. In fact, all handbooks have very important rules for very strict and ideal reasons. But this rule isn't one of them -- not when it comes to Eric, at least.

This isn't an argument about rules, whether you feel they're meant to be bent, broken, untouched or torched. This is matter of evening Eric's playing field for just one more year and not letting his handicap get the better of him, even if it's for one more high school basketball season. It's also an argument for all future student-athletes with disabilities to be able to at least enjoy sports and enjoy the lifelong lessons that come with teamwork, camaraderie and competition. What the state will sacrifice in rewriting a rulebook will not even begin to compare to the joy Eric gains from being with his teammates for one final year.


update from The New York Times:

A third request, which was submitted March 26, suggests language used in Ohio and seven other states that include similar age-rule exceptions for students with disabilities, with no specific reference to Down syndrome. It could be the Dompierres’ best — and last — chance to change the rule.

Roberts said the “broadening definition” of disabilities led to a discussion of where the line would be drawn, and raised concerns about the potential number of waiver requests. Such an exception could open up the state association to allegations in court, he said, as the lack of an exception did in 1995 in an age-rule case that reached the United States Sixth Circuit Court of Appeals. The association was a defendant, and the court found, according to Roberts, “to decide which disabilities should and shouldn’t apply for waiver put an undue burden on the association.”

Dean Dompierre first did the math regarding his son’s eligibility four years ago, after the varsity basketball coach saw Eric playing in the gym and said, “I’ve got him down as a four-year player.” Eric soon began attending off-season workouts and also joined the football team as a backup kicker. The basketball season ended in March, but Dean started preparing Eric for the possibility that his athletic career was ending when the second request was denied. He answered with more uncertainty when Eric would ask, “How are we doing with the law?”

Dean posted a petition in support of his son on the high school’s Web site on March 23. A week later, more than 70,000 people had signed it.

In Ohio, if a student is considered disabled as defined by the Americans with Disabilities Act, the school’s principal, on behalf of the student, can submit an age-exception application, consisting of an outline of the disability and statements — to gather rivaling perspectives — from the principal and an administrator of a school that plays the student’s school in sports, outlining four main criteria: safety risk, physical advantage, competitive equity and redshirting.

“This is basically a rule of compassion,” Moore said.

Moore could not recall any cases in Ohio that had ended in court. Over nine years, statistics provided by Moore showed 24 disabled high school students had been approved and 16 had been denied, with one pending.

Roberts said the Michigan association had not specifically investigated the success of Ohio’s rule.
It is unlikely that a decision will be made regarding Eric Dompierre until May, when the association’s representative council is next scheduled to meet.