Diana Stolfo proud to serve as a voice for Down Syndrome 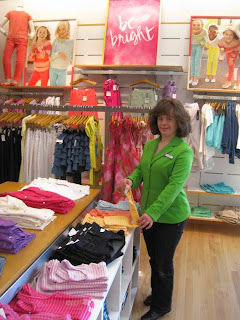 from North Jersey.com by Karen Kleinmann:

Though March might symbolize Irish luck along with the official transition from the winter months to spring beginnings, another event will give additional meaning to the month as World Down Syndrome Day has now been officially recognized by the United Nations.

Allendale resident Diana Stolfo was chosen to represent the National Down Syndrome Society at the UN's March 21 conference recognizing it as World Down Syndrome Day. Above, Stolfo works at her job at the Gap in Ridgewood.

The UN held a conference at its headquarters in New York City on March 21 to celebrate the event and there representing the National Down Syndrome Society (NDSS), which collaborated with other organizations for the event, was self-advocate Diana Stolfo, a current Allendale Orchard Commons resident.

The UN officially recognized the day after Down Syndrome International (DSI) and countries around the world had partitioned the organization to name March 21 after Down syndrome, which is a life-long genetic condition in which varying degree of learning and/or physical disabilities may be present.

Stolfo said she likes being an inspiration to others and thinks it's important that people put aside notions that "we can't do anything. We can, we just have to do it differently," she said.

The former Ridgewood resident added that she enjoys things as much as other people and can work and live independently, but more importantly, she's never been hindered by her condition and continues to follow her dreams and make them become a reality.

"NDSS is considered a sponsor and we wanted to have a wonderful self-advocate be at the event. We chose Diana. We wanted her to be front and center and to shine instead of just having someone from our organization," said Julie Cevallos, vice president of marketing for NDSS.

She added that March 21 being recognized on an international level will help promote the condition and fight stereotypes associated with Down syndrome.

The 501(c)(3) nonprofit's mission is to be the "national advocate for the value, acceptance and inclusion of people with Down syndrome," Cevallos said, and this world recognition fits with NDSS' envisioned world in which "all people with Down syndrome have the opportunity to enhance their quality of life, realize their life aspirations, and become valued members of welcoming communities," she said.

Stolfo joined Cevallos Monday night on NBC New York's Nightly News with Chuck Scarborough to speak about World Down Syndrome Day. "It'll truly be an inspiring event," Cevallos said of yesterday's event. "I think it's important that it's recognized globally as every country is in a different point of acceptance. Some have been very instrumental in having more inclusion in schools and society. But it's important not just as a country but as a world to accept and include people with Down syndrome and other special needs."

Serving as an inspiration Cevallos said Stolfo "exemplifies everything we want the day to stand for, including having people integrate in society, schools and community life" and that Stolfo serves as a role model to many.

"Diana is a wonderful example for people worldwide of what you can do when you are included and accepted," Cevallos added.

On a local level, Stolfo has served as an inspiration to others and made strides to bring attention and awareness to people with special needs, whether it's advocating for greater access to transportation or promoting additional special needs housing.

Stolfo said she enjoys speaking engagements and wants to educate and inspire people to learn more about Down syndrome.

To date she's participated in 12 speaking engagements since 2010 and Wednesday's event was her 13th public speaking event, which does not include interviews on news networks.

In October 2010, when Allendale opened its first special needs housing called Orchard Commons, Stolfo sought to be among the 30 adults that would be given the opportunity to live there independently.

Since that time, she's worked with United Way, which supports expanding housing for special needs, doing speaking engagements and advocating for greater access to transportation in Allendale and bringing awareness to the need of transportation access for those with special needs at a Bergen County Freeholder public hearing.

She said developing more housing for people with special needs is important and she's talked with United Way three times between July and November and also spoke at the Governor's convention on housing and economic development. She also addressed the ARC & Cape Resource Center for Bergen County Special Services.

She's been the Grand Marshall for the Down Syndrome Buddy Walk of Bergen County and spoken at the Ridgewood Access for All weekend testimonial.

In 2011, Stolfo spoke at the National Down Syndrome Society Gala at the award presentation in February, and spent several days in May and June speaking at the DD Connect Housing Panel, Bergen County Freeholders on transportation, NJ TIPS, NJ Transit in Trenton on access for transportation for those with special needs.

Stolfo said she shares and celebrates her life and accomplishments in order to inspire others.

"We've been very blessed," said Stolfo's mother, Joanne. "Diana has been able to accomplish so much and she lives in a great community. She attended ECLC as a senior and was in the Ridgewood School system before that, which also gave her a great education."

While Stolfo attended school in Ridgewood, she participated in DECA, was on the honor roll and joined the student council.

But becoming a self-advocate started when she was thinking of running for president of the student council, she said.

After she started school at ECLC of New Jersey in Ho-Ho-Kus for her senior year of high school, Stolfo became the student council president and was also the newsletter editor.

"Diana's so inspiring, especially to other people who may have other challenges or for parents who might not know what to expect," said Cevellos, who added that Stolfo will be receiving an award at a later NDSS luncheon for her involvement.

World Down Syndrome Day had previously been established in 2006 by DSI, with the goal of "raising awareness and mobilizing support and recognition of the dignity, rights and well-being of people with Down syndrome across the world," according to its website.

The UN's event, "Building our Future," featured speakers from the sponsored organizations, the Missions of Brazil and Poland to the UN, as well as other collaborators around the world.

The day included information about the significance of having it on March 21, as Cevallos said it is the 21st day of the third month of the year - a symbol of the third copy of chromosome 21 present in Trisomy 21, the most common form of Down syndrome.

Statistics indicated that one in every 691 babies in the United States is born with Down syndrome, and more than 400,000 people affected by Down syndrome in the United States and an estimated 7 million people in the world and people with the condition have an increased risk for congenital heart defects, thyroid conditions, Alzheimer's disease, childhood leukemia and respiratory and hearing problems.
Cevallos said that the day is not just focused on what makes those living with Down syndrome different, but the emphasis is on celebrating who they are as people in addition to educating the world about the condition and offering stories of inspiration.

"Public awareness to promote the value and inclusion and acceptance of people with Down syndrome," Cevallos said. "I think we're making great strides but not consistent in the world and country, the more we can share the more we can all learn."

She added that "people don't always understand or know what to expect or no anyone with Down syndrome, education and awareness is one thing, schools are tough, teachers are expected to provide education on an individual basis yet include everyone as part of the larger group, so it's not easy. It takes time to meet the needs of all children."

NDSS' My Great Story collection can be found at ndss.org/stories for more examples of what it means to have Down syndrome in today's world.

"We try to fight stereotypes and it's important that it has its own day," said Cevallos. "March 21 characterizes the condition. But they are people first. They are living with a condition that gives challenges, and it's across the board, the challenges are not the same and they range in degree."
One stereotype of those with Down syndrome is that they cannot maintain a job or live independently.
But Stolfo proves that's not always the case, while certain jobs may be better suited for people with specific types of special needs, it shouldn't be used as a disclaimer for all people with special needs, she said.

She's proud to announce that she has four part-time jobs, one of which she's had for more than a decade.
Stolfo said it's important that people recognize that Down syndrome is a condition, but it doesn't shape who she is.

For her jobs, she currently works as a receptionist at Our Lady of Mt. Carmel church rectory in Ridgewood; is a clerical assistant at ECLC of New Jersey in Ho-Ho-Kus; is a dance assistant at Meaningful Movements in Midland Park; and works as a sales and stock associate at the Gap in Ridgewood.

She's worked at the Gap for 12 years, she said, and previously worked in a supermarket, restaurant and in a real estate company in various positions.

Stolfo's also had several internships, including working at Valley Hospital as a volunteer, a teacher's assistant at a summer special education program in Franklin Lakes and volunteering at the Ridgewood Chamber of Commerce.

Another stereotype Stolfo said is not true is that people with special needs cannot have meaningful relationships.

"I also like Zumba and exercising, movies and dancing," she said. "We're just like everyone else - we can see, hear and speak. I want us to be heard by our voice and not anything else."

Stolfo has also been involved with the Special Olympics as a gymnastic athlete and been awarded with the president's award for excellence, Rebecca S. McDonald Transition Award and the Eagle of the Cross Award for Roman Catholic Youth Group Leadership.

She said she personally doesn't like the word "disability" because it implies "we're not able to do something - that we don't have the ability. What matters who is you are. I changed the word to 'differently-abled' because what matters is what's in our hearts."
Posted by Rick at 4:58 PM