The Buddy Walk on Washington's Impact

This is a family's recount of the Buddy Walk on Washington from the blog Particularly Perfect.

We walked on Washington.  We conquered Capitol Hill.  We spread our message to our Congressman and Senators in an attempt to improve the futures of all people with disabilities. 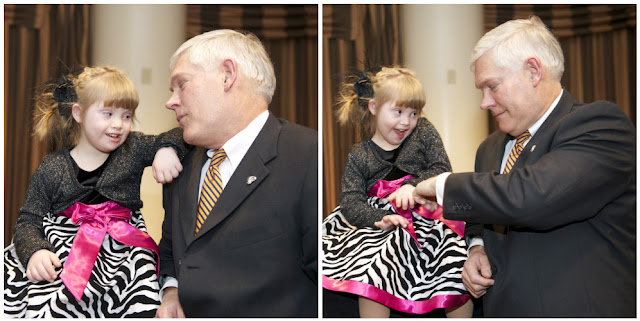 Congressman Sessions spoke about being a fraternity brother of Pi Kappa Alpha...and I have always been a proud sorority sister of Alpha Xi Delta, but Congressman Pete Sessions, of Texas, reminded me just how amazing greek organizations can be.  Congressman Sessions has two sons, Bill {president of his chapter of Pi Kappa Alpha} and Alex {who just happens to have Down syndrome}.  Holding back tears, the congressman explained how proud he is of his fraternity.  This  weekend, Alex was initiated as an honorary brother.  But his pride reaches beyond that.  The congressman has received texts and emails, from men who have never met Alex, stating they couldn't wait to call Alex their brother.  That is the true meaning of brotherhood.  Ties that reach far beyond friendship.  Inclusion.  At the end of the day, that's all we really desire.  To be included.  All of us.  Despite our differences. 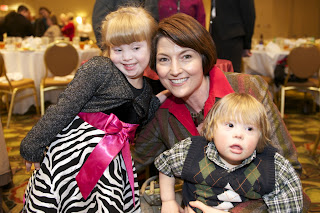 Representative Cathy McMorris-Rodgers has a son, Cole, that just happens to have Down syndrome.  I truly believe that some people have been placed in positions of power to help others.  She is one of those people. Her political strength will no doubt help many people with Down syndrome in years to come.  I am so grateful for her. 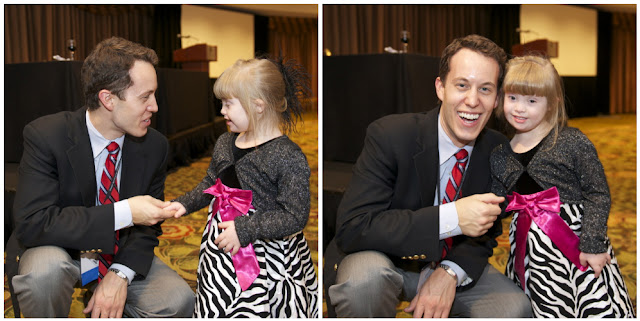 Dr. Brian Skotko - I don't even know where to begin...I am in awe of this man.  Dr. Skotko is an amazing doctor but even more amazing brother.  His sister, Kristin, just happens to have Down syndrome.  Dr. Skotko is a board certified geneticist at the Children's Hospital Boston.  He has written books, conducted important studies and quite simply made a huge impact in the lives of people with Down syndrome...and their families.  He couldn't be more amazing...

What was our message?  Sign the ABLE Act.  Today Kayla cannot own more than $2,000.  She cannot be worth more than $2,000.  Truth.  Sad but true.  Why?  She receives medical benefits from the government.  Most people with disabilities have medical benefits provided by the government but are not able to be worth more than $2,000 or they will lose those benefits.  Kayla can't get money for birthday presents.  We can't save for her college or her future.  We cannot leave her our house or a car.  Her grandparents cannot leave her anything in their wills.  She can't be worth more than $2,000.  Well...there is one way to save money for her future...a Special Needs Trust...but this trust has several issues...
1.  It doesn't transfer from state to state should you move.
2.  It is super complicated.
3.  It costs several thousand dollars to set up...so...truth be told, we'd be using every dollar we would have to give to Kayla just to set up the trust.

And why not allow her the same right as everyone else?  Why should we not be able to save for her future?  She is a person, with a voice...and should have the same rights.  This is why we walked.  She is the reason we fight for equality.  We fight for Kayla and her 350,000 friends living in the United States that also have Down syndrome.  We fight for them.  All of them.

If Kayla were of working age today...why work?  Why attempt to be a contributing member of society if she would be penalized for it?  Many people with disabilities are fully capable of working but don't because it doesn't make financial sense because they will lose their medical benefits.  The system is broken and must be fixed.

So what is the ABLE Act?  If passed, it will be a vehicle of savings that is similar to a 529 education account.  It will allow people with disabilities to save for their future without losing their medical benefits.  The one difference is it doesn't have to be used for education...because not all people with disabilities are on a post-secondary education track...and that's ok...but they should not be penalized for trying to be independent, contributing members of society.  That's my soapbox.  I'll step down for a moment...but if you feel inclined, contact your local congressmen and senators and ask them to sign the ABLE Act, for Kayla.
Posted by Rick at 1:04 PM