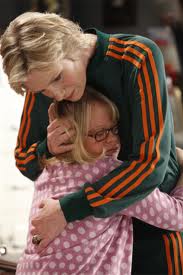 EW managed to talk to star Jane Lynch yesterday at Fox’s upfronts and she admitted that the hour was a tough one to film. “People with down syndrome rarely last past 30,” says Lynch. “Robin is 55. So this really hit home. Her sister is there with her all the time, Sharon. They have a very tight relationship. So it was very bittersweet. The funeral was awful [to shoot] with the kid’s singing ‘Pure Imagination.’ It was really rough and I will miss her very much. I love working with Robin!”

Co-creator/executive producer Ryan Murphy made sure Lynch was comfortable with the plot twist before moving forward with it. Says Lynch, “He took me aside at a party and said ‘I want your blessing on this before we move forward.’ I said, ‘It sounds like a really great storyline.’ It’s the thing that will break Sue Sylvester’s heart and get to where she lives.”
Posted by Rick at 12:07 PM