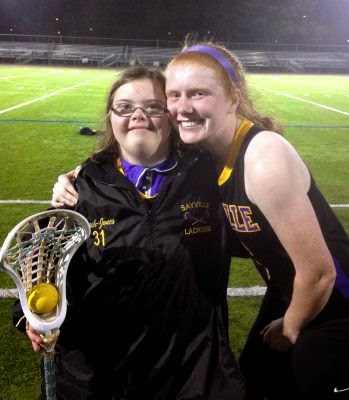 by Stephen Haynes from Newsday:
Farmingdale goalie Olivia Kirk was brought to tears, so moved by a goal she allowed that meant as much as any she had ever prevented.
"That was a great moment; something special," said the senior, one of several players on either sideline overcome with emotion. "How often does something like this happen?"
Meghan LaBelle, a Sayville junior with Down syndrome, scored against Farmingdale with 4.9 seconds remaining in Friday night's game. She carried the ball from midfield, with the help of Sayville's Julianne Johnston, drove up the right wing and fired from close range.
Cameras flashed, video rolled, the benches roared and many in attendance became choked up. LaBelle just beamed, having just realized one of her fantasies.
"Playing lacrosse is my dream," she said, still giddy. "It's my favorite sport. I was excited [but] I wasn't nervous at all. I got to play with my best friend, Jules."
That would be Johnston, who has known LaBelle since kindergarten.
Sayville gained possession with 34 seconds left and coach Adam Sznitken immediately called timeout to insert LaBelle. With aplomb, she posed for photos as the Golden Flashes broke the huddle, and took the field with a warm-up jacket over her No. 30 jersey. She jogged alongside Johnston about 50 yards, inside the 8-meter arc, then flicked in an overhand shot.
LaBelle's goal was the last as host Farmingdale won, 8-6. Laura Fullam and Bridget Weill each scored three goals and Kirk made 11 saves for the Dalers. But the score mattered little to either team.
"I'll remember this night for the rest of my life," Johnston said. "To see my best friend out there, showing she can accomplish anything she wants. She's an inspiration to all of us."
Cailin Stryska, a sixth-grader with cerebral palsy, also was in attendance. The Dalers adopted her as an honorary teammate before the season.
This game was the nightcap of a doubleheader Farmingdale hosted to help raise awareness for Down syndrome. Bayport-Blue Point faced Cold Spring Harbor in the earlier game. The Sayville and Farmingdale coaching staffs organized the event and Mark Miller, a Bayport-Blue Point parent, spearheaded the fundraising effort. In all, the teams raised more than $3,700 for Down syndrome research, Sayville senior Olivia Russell said.
"We talked to Meg's parents about her coming," Johnston said, "and we thought if she could get in the game, it would be phenomenal."
Sznitken said he discussed with Farmingdale coaches Tracy Wiener and Shari Campbell before the game his plan to get LaBelle in late. "But I didn't know she'd score," he said. "I thought it would be awesome for her to just get on the field, but she had the highlight of the night."
When LaBelle scored, Fullam said, "and we saw that big smile, it made everyone so happy and emotional."
"Moments like these bring you back to reality," Farmingdale senior Diana Prendergast said. "It reminds you of what's important, no matter what position you're in."
Farmingdale secured the top seed for the Nassau Class A playoffs. Sayville, last year's Suffolk B runner-up, will attempt another deep postseason run.
"I had so much fun," LaBelle said. "I would love to play again in the future."
Hey, she does have a mean overhand shot.
Posted by DSD at 6:00 AM