Stafford student to walk the runway at fashion show 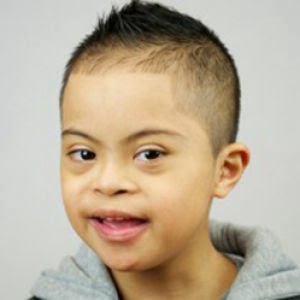 from The Stafford County Sun:
Jose Louis Moreno-Capuzano of Stafford is a model at the Global Down Syndrome Foundation’s Fashion Show on May 7 in Washington, D.C.The show is a fundraiser that features more than 19 models with Down syndrome— including Jose, a first-grader at Margaret Brent Elementary School.He is the son of Jose L. Moreno and Maria G. Campuzano, of Stafford County. He has two brothers, Sahid and Jesus. He is the oldest son, and like his brothers, he was born with Down syndrome.
Jose loves music, playing with his brothers, watching cartoons, playing in the park and attending school, according to organizers.
The show will feature a performance by British singer/songwriter and philanthropist Leona Lewis. Known for chart toppers such as “Bleeding Love,” Lewis has already sold more than 20 million albums.
Other celebrities include HLN’s Kyra Phillips, Fox News’ John Roberts and members of Congress. During the event, Global will honor Sen. Jerry Moran and Rep. Eleanor Holmes Norton with the Quincy Jones Exceptional Advocacy Award for their support of those with Down syndrome.
The event starts with a reception at 6 p.m., with dinner at 7:15 p.m. followed by the show, at Renaissance Mayflower Hotel in Washington, D.C.
The event will raise money for groundbreaking Alzheimer’s disease and Down syndrome research at the Linda Crnic Institute for Down Syndrome.
Posted by DSD at 6:00 AM