2014 TWENTYWONDER to Benefit Down Syndrome Association of Los Angeles, 6/28 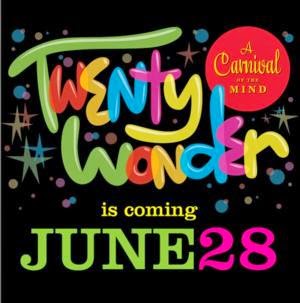 from Broadway World:
Down Syndrome Association of Los Angeles (DSALA) announced today, in celebration of World Down Syndrome Day, that their annual benefit TWENTYWONDER, A Carnival of the Mind, will have its 5th Anniversary on Saturday, June 28, 2014 beginning at 6:00 p.m.
This year's TWENTYWONDER, marks the 4th year, that the L.A. Derby Dolls will host the critically-acclaimed, 21 and older fundraising event, at the Doll Factory (1910 West Temple Street) in Los Angeles. The evening will feature an all-star roller derby bout, music, comedy, art, sciences and plenty of last minute guest surprises. Proceeds will benefit DSALA's efforts to support those born with Trisomy 21/Down syndrome living in greater Los Angeles.
"WOW...I can hardly believe we are about to mount the 5th Annual TWENTYWONDER in Los Angeles! From it's funky/sweaty/adorable beginnings as SuperBall 'The One Day World's Fair' in 1996 to the fun-loving genre bending acceptance/awareness event hailed as today's Carnival of The Mind, this event is a genuine pleaser. TWENTYWONDER repeatedly draws and amazes the sweetest people of Los Angeles with a cultural cocktail shaken with the sights and sounds and ideas for our thirsty modern lives," said Jim Hodgson, Director of Down Syndrome Association of Los Angeles.

Rebecca Ninburg, aka Demolicious, Co-Founder, L.A. Derby Dolls added, "It's a privilege and honor for the Derby Dolls to host TWENTYWONDER for the fourth year. The event is powerful and effective in educating and bringing awareness to the needs of the Trisomy 21 community. TWENTYWONDER is in line with our commitment to serving and elevating underrepresented and under served members of our community. We know that by working together we can achieve greatness!"

Through the years, TWENTYWONDER has been fortunate to have the amazing support of wonderful artists including Joel Hodgson, Black Rebel Motorcycle Club, Exene Cervenka, Lucha VaVoom, Mac King, Tim Biskup, Vaud and the Villians, David Koechner, The Lampshades with Kate Flannery, Dave Alvin, Jacksh*t, Wayne White, Steve O, Sam Phillips and The Section Quartet, Andy Kindler, among hundreds of other great talents and content providers. This year's line-up will be announced on May 1, 2014.

"It seems like everyone who has ever participated in a TWENTYWONDER wants to do it again. I'd expect a few cool surprise guests if I were you," said TWENTYWONDER Friend and Producer Don Foster.

Since 2010, TWENTYWONDER has raised over $400,000 with the proceeds helping to support DSALA's various programs offered to nearly 4,200 individuals with Down syndrome living in Los Angeles. With the monies raised last year, the DSALA continues to reach into new neighborhoods of Los Angeles providing support for those families living with Down syndrome/Trisomy 21. Additionally, the monies from TWENTYWONDER have help to fund programs including: four basketball camps in diverse areas of Los Angeles, reading programs at the DSALA Van Nuys office, host Age of Change -- a game-changing, nationally important conference on Alzheimer's and Down syndrome, partner with UCLA's medical research projects, give free seminars for parents on subjects ranging from endocrinology to potty training, among other valuable program for members of the DSALA community.

This crowd-pleasing annual event is hit with both the audience and the Los Angeles press. TWENTYWONDER was named, "An Event Pick" and called "Awesome!" by the Los Angeles Times. "Part charity, part science, part comedy...a mindbender," proclaimed LAIST.COM. "A once in a lifetime, completely eclectic, fun-filled amalgam of creators, builders and performers," said The Wrap and "One of the essential events of the summer," raved The LoveStain.com.

TWENTYWONDER will be held on Saturday, June 28, 2014 at the Doll Factory in Los Angeles (1910 West Temple Street). The doors open at 6:00 p.m. with live entertainment, food, drinks and attractions throughout the venue. Roller Derby match begins at 8:00 p.m. in the Doll Factory arena. Special performances, art, music, science and comedy, which will be announced on May 1, will continue from 9:30 p.m. - 12:00 a.m. Tickets for TWENTYWONDER go on sale on May 1, 2014. Guests must be 21 or older to attend. Tickets will be available online at www.TwentyWonder.org. Donations are currently being accepted at TwentyWonder.org for the 100 Ambassadors Fund, which helps to give 100 adult members of the local Down syndrome community the opportunity to attend TWENTYWONDER. For more information on the event visit www.TwentyWonder.org or www.DSALA.org.

BASIC INFORMATION ABOUT DOWN SYNDROME:
Down syndrome is the most common genetic condition affecting all ethnicities and economic groups. Down syndrome is found approximately once in every 691 births. Individuals with Down syndrome have an extra copy of the 21st chromosome (Trisomy 21), which causes physical differences and disabilities. Most people with Down syndrome live a rich and productive life thanks to organizations like the DSALA, which has been providing services for more than 35 years to the Greater Los Angeles Area.

ABOUT TWENTYWONDER:
"TWENTYWONDER is the cause-driven cousin of SuperBalls 1-8. The recipe of TWENTYWONDER is easy: take a soulful collection of 100 plus creators, supporters, builders, entertainers, friends and volunteers who've been gathering for years in the name of SuperBall, create a new name derived from the medical term Trisomy 21(Down syndrome), expand the fan base to new and far-reaching sectors of society, then bring it all together for a One-Night World's Fair event to raise support and awareness for those born with Down syndrome living in the Greater Los Angeles area," said Jim Hodgson, Director of Administration and Development, DSALA. The inaugural fundraising event TWENTYWONDER began in 2010.

ABOUT DOWN SYNDROME ASSOCIATION OF LOS ANGELES (DSALA):
The Down Syndrome Association of Los Angeles (DSALA) was started over thirty-five years ago by fifteen forward-thinking parents of children born with Down syndrome. In an era when society's predominant response to individuals with Down syndrome was to place them in institutions, these pioneers stood up for what is right, took control, and opened up the dialog that all grateful new parents in the Down syndrome/Trisomy 21 community are advancing today. DSALA offers information, guidance and programming designed to assist parents and families who have a family member with Down syndrome. Part of DSALA's mission is to educate and enlighten a wider community to fully understand that everyone deserves respect, inclusion and that "we are more alike than different."
ABOUT THE L.A. DERBY DOLLS: