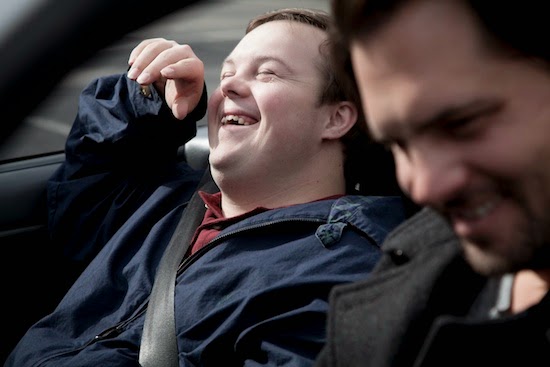 by Lauren Smart from The Dallas Observer The Mixmaster:
When Chris Dowling began writing his film Produce, he didn't know he was writing a film about down syndrome.
"I wanted to write a story about faith," he says. "And then as I was working on the film's narrative, I realized there had to be a character with this childlike faith and so I ended up writing a young man with down syndrome."
When I speak with Dowling, the Dallas native is rushing to get through the final stages of production on his second full-length film, which premieres at the Dallas International Film Festival at 5:45 p.m. Sunday, April 6 with a repeat screening Monday, April 7 at 1 p.m.
The movie follows Calvin, a professional baseball player forced into an early retirement in Kentucky, where he struggles to raise a teenage daughter. Like most films about washed-up sports players, Calvin hits rock bottom, which is when he meets a kid with Down syndrome nicknamed Produce, because he works at the local grocery store. The rest of the film, predictably, is about Calvin's redemption. What's not predictable about this film is that in role of Produce, Dowling chose to cast an actor with Down syndrome.
"Usually filmmakers cast someone to play Down syndrome, but as I began to research the disability, I didn't want to do the story an injustice. I didn't want it to feel contrived," Dowling says. "It might be the most lines an actor with Down syndrome has ever had in a film, but the only limitation that people with Down syndrome have are the ones we put on them."
David DeSanctis, the 21-year-old man who plays Produce in the film, had never acted before being cast in this film. Dowling discovered DeSanctis with the help of Down Syndrome of Louisville, Inc., a non-profit organization that provides support to the local community where they shot the film.
"As the cast and crew got to know David, we learned he's probably happier than 80% of my friends," Dowling says. "Finding that joy and embracing it was part of the film. He's the conduit for change in the film and I hope people leave asking, who am I simply passing by or ignoring in my daily life?"
For Dowling the biggest surprise of working on the film he wrote was discovering truths about how he treats people everyday.
"It's a microcosm of the sad fact that we do overlook and feel sorry for people with down syndrome," he says. "We apologize to the parents. I'll never do that again."
See Produce at the Angelika Film Center as part of the Dallas International Film Festival, 5:45 p.m. Sunday, April 6 or Monday, April 7 at 1 p.m. More information and tickets available at dallasfilm.org.
Posted by DSD at 3:00 PM