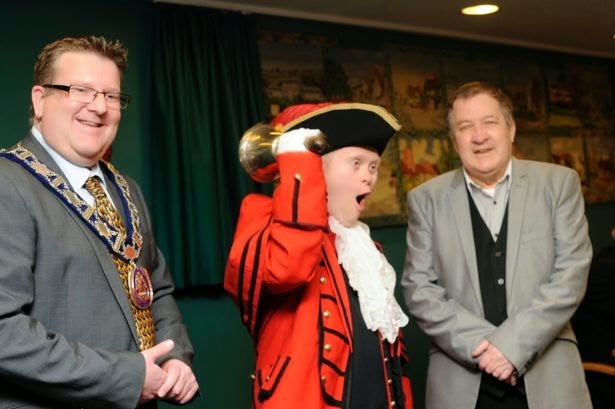 by Jack Abell from GetBucks:
THE man who was the UK’s first town crier with Down’s Syndrome has been nominated for a Pride of Bucks award.
William Ellis, 35, of Bois Moor Road, Chesham, recently stepped down from his position as Chesham town crier.
He hit national headlines when he was appointed in 2011. Before then, he spent a year as mayoral ambassador to Chesham’s town mayor.
Last month, he gave up the voluntary town crier role, with a presentation being held for him.
Mr Ellis was put forward for the award by Kathryn Graves, who is policy and projects officer for Chesham Town Council. “William has been an inspiring ambassador for Chesham and for people with learning difficulties, showing just what is possible,” she said.
“By having such a visible role in the community, William has given many residents the opportunity to meet someone with a learning disability and discover the positive contribution that they make to the town, something they may not otherwise have had the opportunity to do.
“William has also been a beacon of hope for people more widely. For example, he received a letter from parents with a baby with Down’s Syndrome, who thanked him for showing them the opportunities that will be available to their daughter when she grows up.”
At the recent presentation, Mr Ellis was given a framed portrait of himself in his regalia and his mother Carol received a bunch of flowers.
Mrs Graves added: “William is very aware that he is a role model for others and has said that he hopes that his time as town crier will make other people with a disability try to do the things they want to do.”
Posted by DSD at 6:00 AM