Baby With Down Syndrome Is New Face of Designer Ad Campaign

from WFMY News 2:
A 10-month-old girl from Miami has been named the new face of designer Dolores Cortes' new DC Kids swim suit line. Valentina Guerrero is the first person with Down Syndrome to be the main model of a campaign.


from MSNBC by Samantha Randazzo:

By Samantha Randazzo, Styleite
We have a feel-good story for you: Valentina Guerrero, a 10-month-old Miami girl with Down syndrome, is now the face of Spanish swimwear designer Dolores Cortés' 2013 children's swimwear collection, DC Kids.
Although she is not the first child with Down syndrome to model, Valentina is considered the first to land a campaign with a well-known designer. Cortés showed her collection during Mercedes-Benz Fashion Week Swim 2013 and even brought Valentina out to walk the runway. The designer told AdWeek:

“People with Down syndrome are just as beautiful and deserve the same opportunities. I’m thrilled to have Valentina modeling for us.”

Valentina’s mother, TV host and producer Cecelia Elizalde (also known as Ceceliz) told the Down Syndrome Association of Miami how she felt when the brand told her that they wanted Valentina to be their spokesmodel:

“I was excited, mainly because the fact that they are placing Valentina on a catalog sends a very clear message of inclusion; all children deserve the same opportunities, regardless of their physical, economic, social, racial or medical condition.”

Cortés has also pledged to donate 10 percent of the profits from the DC Kids line to the Down Syndrome Association of Miami. Check out the collection here, and look at the adorable photos from the campaign below!

“She’s taught us far more than we could ever teach her,” she told Vanity Fair Italy.
Read more: http://latino.foxnews.com/latino/lifestyle/2012/07/24/latina-with-down-syndrome-graces-cover-catalog/#ixzz21eyn2mRk

More from New York Daily News:
“People with Down syndrome are just as beautiful and deserve the same opportunities,” Cortes said in a statement. “I’m thrilled to have Valentina modeling for us.”
Read more: http://www.nydailynews.com/life-style/fashion/10-month-old-girl-syndrome-face-new-swimwear-ad-campaign-designer-dolores-cortes-article-1.1120740#ixzz21ezRaa3r


from People by Rachel Goldstein and Kristen Mascia: 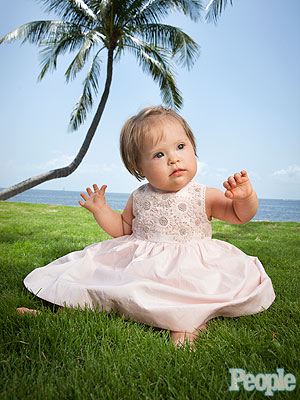 Brian Smith
The first time fashion scout Monica Hillman laid eyes on little Valentina Guerrero, she knew she’d found a beauty.
“Her eyes and her smile,” says Hillman, “touched my heart.”
Discovered by Hillman, a scout for Spanish fashion designer Dolores Cortés, Valentina — featured in PEOPLE this week — is considered the first child model with Down syndrome to land a campaign with a noteworthy fashion designer.
As the face of DC Kids, Cortés’s children’s swimwear line, 10-month-old Valentina made her runway debut July 20 at Mercedes-Benz Fashion Week Swim 2013 in Miami.
“The crowd went nuts!” her mom Cecilia Elizalde, a Miami-based TV host, tells PEOPLE of the response to Valentina, who was carried out by Cortés at the end of the show.
Though Valentina isn’t the first child with Down syndrome to model — others have been in ads for Target, Nordstrom and Toys”R”Us — with her new campaign, she’s one of the most high-profile.

“We’re definitely seeing a rise [in models with special needs],” says agent Fabiola Osorio, whose agency FFT represents another child model with Down’s.
These days it’s become more “important to companies to show different faces,” she adds of efforts within the retail and fashion industries to promote more diversity in their ad spaces.
That Valentina’s helping lead the way with that couldn’t make her parents any prouder.
“Life is so amazing with her,” says Elizalde.
For more on adorable Valentina, pick up the latest issue of PEOPLE, on newsstands Friday. 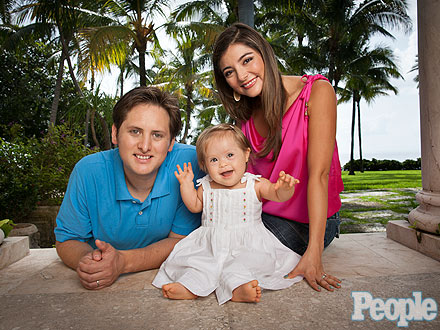 Brian Smith
–Rachel Goldstein and Kristen Mascia
Posted by Rick at 7:00 AM