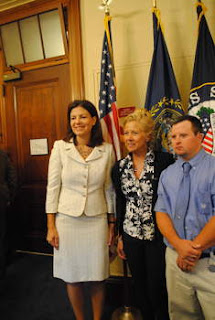 by Saba Hamedy from the Nashua Telegraph:
As superintendent of New Hampshire’s Kearsarge Regional School District, Jerry Frew has seen first-hand how cuts at the federal level can affect schools in the state.

“If funding is frozen, eliminated or reduced for professional development, it has a dramatic impact on some of our small rural districts,” he said. In turn, the state would have trouble meeting its obligations, and the local tax burden would “crush” some areas in New Hampshire, he added.
Frew’s concerns – along with those of his colleague Mike Martin, superintendent of Merrimack Valley School District Unit #46 – were among the issues raised Thursday with Sen. Kelly Ayotte, R-N.H., at the weekly “Coffee with Kelly” in her Capitol Hill office.
Ayotte has been making the rounds on the national TV circuit amid speculation about her becoming a running mate with Mitt Romney. Still, Ayotte says she’s committed as ever to the people of New Hampshire and the issues facing the state.
Her weekly hour-long informal gatherings, which takes place at 9 a.m. every Thursday when the Senate is in session, are open to New Hampshire residents who are visiting the nation’s capital on business or pleasure.
“Whether I’m at home or in Washington, I want to hear directly from Granite Staters,” Ayotte said later in a statement. “My weekly coffee is a great way for visitors from New Hampshire to let me know what’s on their minds.”
On this particular Thursday, Frew and Martin were joined by about 12 others in Ayotte’s office in the Russell Senate Office Building, all snacking on donuts and drinking coffee in anticipation of speaking with the senator.
When Ayotte arrived, she greeted everyone warmly. “I appreciate all of you being here today,” she called out to the group.
Rather than sit at the head of a table in a more formal meeting-style session, Ayotte made rounds around the room, making sure to meet, talk and pose for photos with all of the attendees.
Afterward, she hurried off to the Senate floor to talk about sequestration.
Ayotte, who began holding the “Coffee with Kelly” sessions a little over a year – about six months after joining the Senate – is one of several members of Congress, including Montana Sens. Max Baucus and Jon Tester, who hold informal gatherings in their D.C. offices.
“It’s kind of like an open house,” said Liz Johnson, Ayotte’s press secretary. “There are constituent meetings every day – but this is an opportunity for families and visitors to chat outside a formal setting and spend personal time with Sen. Ayotte.”
Johnson said the number of attendees varies from week to week, but that the sessions often get crowded, especially during school holiday periods. The largest group on a single Thursday was 62 people during April. People are able to attend after signing up online in advance.
While some, such as Frew and Martin, attend the caffeinated sessions to talk about pending legislation, others, like Bedford resident Lisa Heaps, decide to come just for the experience.
The stay-at-home mom of three – visiting relatives in Maryland – headed to Capitol Hill with her children, nieces, nephews and sister-in-law, as part of a family day in D.C.
“We try and do something cultural every time we come back and visit the family,” said Heaps, who volunteered in Ayotte’s 2010 campaign. “I’m excited to have my family meet Kelly because I think she’s going to go places … I’m not here to air any issues. This is going to be more social.”
And some, like Dodi Mitchell and Isaac Hartigan, both of Nashua, came to discuss policy as well as socialize with the senator.
Mitchell and Hartigan, who has Down syndrome, were in Washington for the National Down Syndrome Convention.
“We are here to educate,” Mitchell said. “I think that although most people understand that there [are] a lot of citizens in our community with Down syndrome, I think many people don’t know a person with Down syndrome – and they don’t realize how productive and capable and what an integral member of the community they are.”
Mitchell, a coordinator for Nashua’s Special Olympics, said she felt talking to Ayotte would be helpful to hers and Hartigan’s cause. “I think [Sen. Ayotte] is interested in the issues and I definitely think she will be able to help us,” Mitchell said.
Added Frew: “I think it’s really important that our senators and members of the House have access to us so they can hear the local impact of decisions made here. It’s a great opportunity for us to share a local perspective with these folks who have great intentions and quite frankly, the power to change things.”
Posted by Rick at 3:50 PM