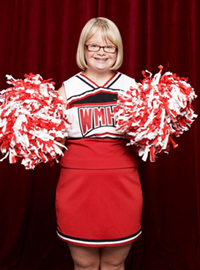 from Disability Scoop by Michelle Diament:
When students on Fox’s “Glee” graduated this season, many considered college. Now a Twitter campaign is calling on the show’s writers to make the same plan for a character with Down syndrome.
Using the hashtag #College4Becky, a social media push launching this week is encouraging the “Glee” writers to send Becky Jackson to college at the end of the show’s next season. Though the character is believed to be a rising high school senior, little has been said about her future...
“We want to plant a seed,” said Meg Grigal, the co-director of the group behind the campaign. “College is a real option for people with intellectual disabilities.”
Lauren Potter, 22, the actress with Down syndrome who plays Becky Jackson on “Glee,” attends Irvine Valley College in Irvine, Calif. in real life.
“I know she will love the idea (of Becky going to college) because she loves the idea that she is in college,” Potter’s mother, Robin Sinkhorn, told Disability Scoop, adding that she had not yet had an opportunity to discuss the campaign with her daughter who was traveling Monday. “It would be a great storyline.”
Potter’s character has long been a fan favorite in the disability community and the actress has not shied away from taking a stand. She’s used her platform as a “Glee” cast member to raise awareness about bullying of people with disabilities among other issues and currently serves as a member of the President’s Committee for People with Intellectual Disabilities.
Officials at Fox did not respond to a request for comment about the Twitter campaign.

the open letter from Think College:
Dear Glee writers,
We think Becky Jackson is fabulous. And we'd like to ask you to send her to college.
More and more colleges across the U.S. are enrolling people with intellectual disabilities, just like Becky. Vanderbilt, Virginia Commonwealth University, and Highline Community College in Washington are just a few examples. All of Becky's friends on the show are heading off to college next year. That's something she can do too--but we haven't yet heard what her plans are after graduation.
Your show has made a huge impact on young people. Lesbian and gay teens have been inspired by Kurt Hummel to stand up to bullying. Glee is inclusive in a playful, non-preachy way. That includes Becky--both the way you write her, and how she's played by Lauren Potter.
If you make college plans for Becky, you'll be raising the expectations of all your viewers with Down syndrome and other intellectual disabilities. You'll be helping them dream big, and know what options are out there after high school. We think that would be brilliant.
And if Sue Sylvester's baby does have a disability, she'll have a tremendous role model in Becky as she heads off to college.
Thanks for considering this idea! And thanks for all you do as writers on Glee.
With appreciation,
Meg Grigal, Ph.D.
Co-Director, Think College
Institute for Community Inclusion
University of Massachusetts Boston
meg.grigal@umb.edu

from Down Syndrome in the Arts and Media:
This is an excellent idea and could be in the works at GLEE since Becky has at least one more year of HS. But did anyone pick up the phone like a grown-up and talk to the producers first? Is the DS community becomming the bullies launching this sort of cyber campaign? There are many of us in Hollywood who advocate for many different causes. We work with producers and call on these tactics as a last resort. The next time someone has an idea and wants to talk to producers give me a call. We can set up a phone call or a meeting. I hope you don't estrange your cause because of the manner in which you took it on.
Posted by Rick at 7:00 AM