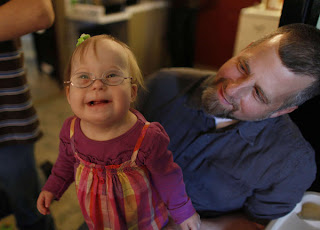 from the Philadelphia Inquirer by Tom Avril:

Reduced to bare numbers, the story of Katie seems impossible.
Age: 9 1/2 years.
Height: 29 inches.
Weight: Less than 11 pounds.
Yet that is how she was, lying in a crib in a Bulgarian orphanage, when Susanna Musser showed up to become her mom.
The little girl was alive, more or less. Her legs looked thin as broomsticks. Her skin was colorless, her brown eyes empty. She looked as if she might break.
Thousands of miles away, physicians at Children's Hospital of Philadelphia reviewed her records and struggled to understand. Katie had Down syndrome, but that would not explain why, at the age most children enter fourth grade, she weighed little more than a baby.
The doctors eventually agreed with Susanna and her husband, Joe, that this was a case of horrific neglect - that Katie, along with more than a dozen other disabled children at the orphanage, was simply a victim of long-term starvation.
What Katie needed, in careful doses, was healthy food. Once she left the orphanage for her trip back to Pennsylvania, however, the hollow-faced child had other ideas.
Finally in the arms of parents who had waited months to hold her fragile body, Katie suddenly refused to eat.

It began, as so much else does these days, with the Internet.
Joe and Susanna Musser had a large, happy bunch of kids in their cozy, gray-shingled house, at the end of a gravel driveway in Lancaster County. Joe, a former pastor, earned a living as a carpenter, while Susanna taught their nine children at home.
Then came Verity. The Mussers' 10th child, whose name means truth, was born with Down syndrome. Though they knew almost nothing about children with disabilities, they saw her as a blessing from God.
So when Susanna started a blog, she named it "The Blessing of Verity," and it quickly drew an avid group of followers.
One of them e-mailed Susanna to ask about adopting children with Down syndrome, so Susanna did some research. She came across a Today show video from 2007, with wrenching images of emaciated children, confined to cribs in a Serbian mental institution. Some, like Verity, had Down syndrome.
Devout Christians, Susanna and Joe couldn't imagine that someone like their daughter would be discarded that way.
They looked at each other and realized that they, too, wanted to adopt.

Read the full story here.
Posted by Rick at 9:51 AM