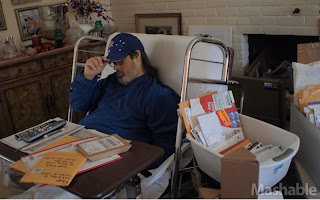 from Mashable by Christine Erickson:
Scott Widak and his family recently received the greatest gift anyone in their situation could receive — a viral act of encouragement and kindness from complete strangers.
Widak, 47, has Down syndrome and is terminally ill with liver disease. After frequently checking in and out of the hospital, Widak is now at home with his 85-year-old mother, who’s helping with his in-home hospice care.
To cope with such a challenging situation, Widak’s nephew, Sean O’Connor, turned to the Reddit community to see if anyone would be interested in sending a letter to his uncle.
“One of my uncle’s favorite things to do is open mail, and I thought that if he got a lot of mail it would cheer him up,” says O’Connor.
Within three hours, the post received more than 1,300 comments, most of which expressed interest in sending mail. O’Connor then included a link to a news article about Widak and his art, along with two photos of him and his mother, a P.O. box address and a few things he’s interested in, like Johnny Cash.
Due to the amount of personal information, Reddit removed the post four hours later — which was apparently enough time for most of the commenters to copy the address.
Following the post, Widak received hundreds of letters from all over the world, including the United States, Sweden, Finland, Australia, Japan, the United Kingdom and Mexico. According to O’Connor, there is still mail coming in.
In addition to beautifully written letters, Reddit users have sent custom artwork, art supplies, DVDs and personal keepsakes that they wanted to pass on to Widak.
Sony Music Entertainment sent him 15 CDs/DVDs, which were mostly by Johnny Cash.
“The mail that’s arrived has all been extremely positive and thoughtful,” says O’Connor. “My family and I are amazed at how so many strangers could come together for a random act of kindness.”
O’Connor and his family have shared these images of Widak and the overwhelming amount of mail he’s received. Take a look and share your thoughts in the comments.
Posted by Rick at 9:33 AM