mother refuses to be bowed by myriad hardships 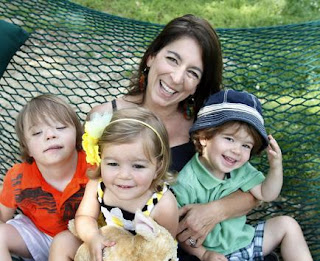 from the Richmond Times-Dispatch by Bill Lohmann:
This is not exactly the way Kim Moncrief figured motherhood would go, but that's OK by her.
"It's been an adventure," Moncrief said one recent afternoon, sitting at her dining room table. "That's for sure."
Here's a recap of the last half-dozen years: Her son Logan was born in 2006 with Down syndrome and a heart defect that required two surgeries by the time he was 3 months old; her twins born in 2009 needed physical therapy when they were slow to crawl and walk; and she has battled breast cancer. Twice.
In the middle of everything, her husband, Johnny, was laid off from the staffing agency where he worked as a manager, and they started several businesses to stay afloat.
"We waited all this time, bought a house, had everything set up," Moncrief said. "You just never know what's going to happen in your life.
"It's never been normal since the day we started this. Now, we look at it and just laugh because first of all, it's silly to think about what 'normal' is. 'Normal' is just whatever you become."
Moncrief marvels at the unexpected paths she has taken because of her circumstances. Friends marvel at the way she has traveled those paths.
"When I look at Kim, I see the most remarkable person I have ever met," said Anne White. "Whenever I start to think things are tough, all I have to do is think about all Kim has endured and how graceful she has been through it all, and I realize things really aren't that bad.
"It's about how we deal with the challenges we are given in life, and she is truly an inspiration in how she has dealt with everything."
White's daughter, Lindsay, who just turned 20 and who has Down syndrome, dances with Miracles in Motion, a dance troupe for children with special needs that Moncrief founded after Logan was born. While she was managing her children's special needs and undergoing treatment for breast cancer, Moncrief, a longtime dance instructor, was encouraging and inspiring other people's children through tap and ballet.
"Even through her bouts with cancer, she made sure our kids' dance routines kept going with little disruption for them," White said. "She was battling cancer, yet wanted to make sure the dancers were OK. How selfless is that?"
Lyn Dodge, whose 8-year-old daughter Emily has Down syndrome and dances with Miracles in Motion, said, "Kim is an incredible woman with a huge heart for everyone. She certainly gives way more than she receives."

* * * * *
Moncrief, 42, knew her life had changed when tests during her first pregnancy showed the child was likely to be born with Down syndrome — and that was if he survived at all. In utero, the child's heart wasn't formed properly, one lung wasn't doing anything and the other was filled with fluid, as was the brain.
"Once we got over the initial shock of it, then we just sort of went through it," Moncrief said during an interview at her home in western Henrico County. "We just decided we're just going to keep going. If he makes it, he was meant to be here, and if he doesn't make it, then we're meant to do something with that.
"There's a purpose for everything."
Just before Logan was born, the chamber in his heart developed, his lung began working properly and the fluid cleared from his brain.
"It was really crazy," she said. "They said it was a miracle."
Another moment of magic had occurred weeks earlier when Moncrief faced one of her competitive dance classes and told them what was going on with her pregnancy. She told them if the baby survived he would have Down syndrome, "but we want him here." The reaction was largely somber except for one student who blurted excitedly, "That is awesome!"
The student, Ashley Gregory, came up with the idea for a dance troupe for children with special needs. She reminded Moncrief for months what a cool idea it would be until Miracles in Motion came to be under the auspices of Ann Catherine Cross School of Dance, where Moncrief teaches and where Gregory still helps her.
"She's my other inspiration," Moncrief said.
Logan is the other one. Before Moncrief could start Miracles in Motion — in which she would provide instruction and costumes to children with a wide range of disabilities and have them perform, just like the children without any special needs, so the community could see them, too — she needed to get her son well.
He spent much of his first year in hospitals. Once he was on the mend, she launched Miracles in Motion.
Then she was diagnosed with breast cancer.
She underwent a lumpectomy and radiation treatments, and everything looked good. So she and Johnny decided to try to have another child — and they ended up with twins.

The twins, Isabella and Gibson, were 4 months old when Moncrief discovered she had breast cancer again. A month later, Johnny lost his job, and the couple scrambled to bring in income, starting an ice-cream shop, a commercial cleaning firm and a T-shirt business (http://www.getdowns.org/) that aims to raise awareness about Down syndrome.
"It was wild there for a while," Johnny Moncrief said. "We really feel like God put us in situations that we've overcome and been able to inspire others. It's almost like we've been able to do more through it than we would have ever been able to do otherwise.
"You can't sit around saying, 'What if?' all the time. This is the way it is, and you have to live with it. It just becomes your life."
Kim underwent a mastectomy and additional surgeries. Family and friends stepped forward and helped with meals and support, and the Moncriefs made it through.
"It was a crazy blur of things," Kim said. "I don't know how it all worked out, but it did.
"Everything is good now."
The twins, now 2½, are running around, and Logan, who turns 6 in June, is thriving — still undergoing therapy, but playing basketball and soccer and loving going on stage to perform with Miracles in Motion. Johnny is working as an insurance agent, as well as managing businesses the couple started in recent years. Kim's health is fine, and she's back to teaching dance, including Miracles in Motion.
"It's just unbelievable how nothing can seem to get her down," said daughter-in-law Amber White, who is married to Moncrief's stepson, Jeffrey, from her first marriage. "She remains positive throughout everything. She will never be defeated."
Moncrief said the challenges of the past few years have made her wiser and more confident, taught her to take what you're given, learn what you can and press on, and "it will work itself out."
"I've always been open to whatever comes," she said. "I've always been the kind of person that rides the wave, just kind of jump in and go, 'Wooo!'
"I always knew there was something important I was supposed to do, but I wasn't there yet. Then I had Logan and the dance troupe. Everything has come together the past five years, and I know where I'm supposed to be."
Posted by Rick at 10:13 AM