Christmas wishes come true for man with Down syndrome 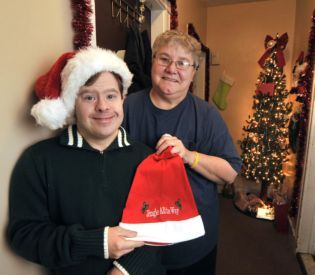 from Boston Herald by Richard Weir:
When a widowed friend died suddenly in March, leaving her 37-year-old son with Down syndrome alone in the world, Robin Lungo became his adoptive mom — a deed that nine months later has renewed her Christmas spirit and provided her a gift she can’t buy at the mall.


Despite living on a meager disability check and battling breast cancer, Lungo, 58, a widow herself and mother of a grown daughter, kept her promise to her late 71-year-old friend Mary and took her son William Marshall Jr. into her small Somerville apartment.


She has dug into her savings to keep up William’s routines, taking him to the movies once a month and to his weekly bowling league, and splurging on the popcorn he loves at both. But Christmas was proving to be a hardship because Lungo knew William cherished the holiday and was used to a bounty of gifts his mom would leave under their tree on Christmas and Little Christmas, an Irish celebration on Jan. 6 marking the Feast of the Epiphany.


“He believes in Santa. He can’t wait for him to come. He’s got his list on the refrigerator. After Thanksgiving, he was sitting in the chair, and he says to me, ‘He’s coming. Santa’s coming.’ Every time I say it, I get goose bumps,” she said. “William is used to a big Christmas.”


“Derr Sante Clus,” begins the list that William penciled on loose leaf paper in a 6-year-old’s syntax and proudly showed a reporter, itemizing the things he needs (a new hat, gloves) and wants (Disney DVDs, CDs of oldies music).


“My husband died Thanksgiving 18 years ago. It hasn’t been happy Christmases for me for a while,” said Lungo, who said having William in her life has brightened her holidays. “He will come over and just rub my face and give me a hug and a kiss. He’s very affectionate.”


So she dusted off her artificial tree and, for the first time in years, strung lights and hung decorations to make her home more festive for William. But still she fretted about finding the money to buy him gifts.


A friend, however, wrote a local Down syndrome support group seeking help in buying gifts for the man with the boyish spirit who still believes in St. Nick. The group’s founder, Melanie McLaughlin, whose daughter Gracie, 4, has Down syndrome, was so moved she reached out to her network of moms and collected three bags of donated gifts and $150.


“It’s a beautiful thing that she did. She’s honoring her friend by caring for her son, whom she’s known for a long time and clearly loves. It’s not easy. She’s living paycheck to paycheck,” McLaughlin said.


A grateful Lungo said the presents will make William so happy today and make her smile as she watches him open them.


“The whole spirit of giving and Christmas has come full circle for Robin,” said Lungo’s friend, Jackie Murray, 56. “She’s always been a giver and with William she has received the true joy of Christmas. His gift to her is the gift of love.”


And, explained Lungo, a renewed purpose in life.


“He gives me a reason to be here, too. I’m a three-time cancer survivor. I think that’s why I’m here. To take care of William. It’s kind of my job. I promised I would do it and I’m doing it. Right, William?”