waiting to adopt 2 children with Down syndrome 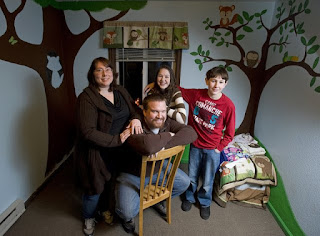 from The Columbian by Paris Achen:


Vancouver residents Mark and Rebecca Jenks agreed to pray for a sign about what kind of child to adopt as they were waiting for a service to begin at Hazel Dell’s Messiah Lutheran Church.


A few minutes later, about a dozen young people with Down syndrome sat in the pew in front of them, Rebecca Jenks said.
“Literally, you don’t get a bigger neon sign than that one,” Mark Jenks said.

The Jenkses had researched adopting a child with a disability for about a year before committing to adopt two children with Down syndrome from an orphanage in Eastern Europe: Sydney, a 3-month-old girl, and Lucien, a 2-month-old baby boy. Their names are assigned by the adoption agency; the Jenkses will change them when they take legal custody.

“We said, ‘What if we look into a child who really needs a home rather than healthy children,’” Rebecca Jenks said. “We looked into blind, deaf, cerebral palsy, HIV, Down syndrome. We kept going back to Down syndrome.”

The couple found Sydney first on the Reece’s Rainbow Down syndrome Adoption Ministry website. The nonprofit organization connects American families with children with disabilities or HIV from Third World countries and helps families raise money to pay for the adoption. They later found Lucien through the same site. Sydney’s and Lucien’s adoptions will cost a total of about $30,000. So far, the family has raised $1,301 through its two blogs, the Reece’s Rainbow website and its church community.

Rebecca Jenks’ 15-year-old daughter, Tamara Emler, first spotted Sydney’s photograph.
“Tamara saw her and said, ‘Come look. There’s my sister,’” Rebecca Jenks recounted. “My heart fell out of my chest. That’s our little girl. There was no thought about it.”

The Jenkses were married in 2008. Rebecca Jenks, a preschool teacher, has four children from her previous marriage. Two of them are adults and have moved away from home. The other two children, Tamara and Brandon Emler, 13, live with the Jenkses at their home in Meadow Estates, just north of Walnut Grove. Mark Jenks, a computer help desk technician, has no children of his own. He and Rebecca Jenks said they want to experience having children together.

Having read about the scale and condition of orphaned and abandoned children around the world, the couple opted for adoption. Their search seemed to gravitate toward children with Down syndrome, Rebecca Jenks said.

Reports about the treatment of children with mental disabilities in Eastern Europe added to the family’s certainty that they wanted a child with Down syndrome from that region.

In that region, children with mental disabilities are often given up by their parents for adoption due to the social stigma of having such a child, as well as scarce government resources to help parents raise a child with special needs, said Andrea Roberts, founder of Reece’s Rainbow.

Once they’re surrendered to the state, the children frequently are institutionalized for life, first in an orphanage and later in a mental institution for adults, Roberts said.

Brian and Rachel Davis of Hillsboro, Ore., recently adopted a 2-year-old boy with Down syndrome from Bulgaria. Brian Davis and his mother brought the toddler, Jordan, home Dec. 3.

Rachel Davis, who also has two biological daughters, ages 2 and 4, said raising a child with Down syndrome isn’t dramatically different than bringing up a typical child. The main difference is that children with Down syndrome often have more medical needs and are developmentally delayed, according to the National Association for Down Syndrome. The children are at greater risk of heart defects and infection. They’re also subject to more incidence of respiratory, vision, hearing and thyroid problems.

Rachel Davis said one of the most common questions she gets is “‘Aren’t you worried about how it’ll affect your other children?’”

“We are hoping it will affect our other children because we don’t want our other children to grow up selfish and feeling awkward around people with special needs,” Rachel Davis said. “Jordan is the perfect opportunity to learn how to love unconditionally.”

In the spring, the Jenkses plan to travel to Sydney’s and Lucien’s country to complete their adoptions. They plan to rename her Olivia Ann and him James Antonio.

Rebecca Jenks said some of her friends and family members think she and Mark should enjoy their freedom after Brandon and Tamara leave the house. But she said after researching adoption, she feels passionate about moving forward.

“Knowing there are children out there who live in orphanages and don’t even have a home and we are financially able to give them a good life, how can I sit here and say we can retire in a few years and go off to Bermuda or Hawaii and not help them?” Rebecca Jenks said. “I want to do something to make the world a better place. If I can’t do that, how can I ask my children to do that?”

To make a donation to help pay for Sydney’s and Lucien’s adoptions, visit Mark and Rebecca Jenkses’ blog at orphanrescuemission.blogspot.com.
Posted by Rick at 12:36 PM