Down Syndrome Daily's goal is to bring current news to the Down Syndrome community. These are the top 5 news items for 2013 based on DSD views.

John T Farley to serve as board member for the NDSC

Five years ago Farley began his run for the board of directors of the National Down Syndrome Congress. Each year the self advocates select one of their peers to represent them on the national board. Only one is voted in annually, and some years as many as 20 individuals run for this position.

Boy with Down syndrome, 6, left to die because of tired doctor's mix-up 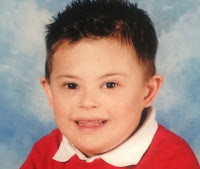 A six-year-old boy with Down syndrome died after a hospital doctor mixed him up with another child who had a 'do not resuscitate' order.

Defending Kids with Down Syndrome: A Life Lesson on Vacation
“We can not stay in this store,” I told him sharply. My son and my daughters, ages 5 and 7, were confused. “This store is making fun of people with Down syndrome,” I told them.

Down syndrome: Nutrient-dense foods are best

The best way to avoid unnecessary weight gain is to feed children nutrient-dense “real” foods and limit junk foods. As a rule of thumb, buy food that is grown rather than manufactured; so, plenty of fruit and vegetables. Since digestive issues are common in children with Down syndrome, a truly digestible diet can go a long way in preventing or treating yeast and/or constipation issues as soon as they appear.

Mark Jones created a Google Doodle proposal for World Down Syndrome Day. Although it wasn't used by Google, it still generated a lot of global attention (it really did!).

Down Syndrome Daily is dedicated to supporting people with Down syndrome and we sincerely appreciate those who subscribe to our site and social media. We also thank everyone who sends articles and pictures!
Posted by DSD at 10:42 AM