Was the Glee school shooting episode offensive to people with Down syndrome? 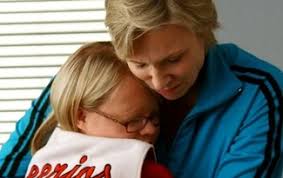 by Sonya Sorich from the Ledger-Enquirer
Warning: This post contains some spoilers about the April 11 episode of "Glee." If you haven't seen the show and want to avoid spoilers, stop reading now. Thanks.The April 11 episode of "Glee," which featured a high school shooting, sparked a debate on Twitter about the Fox show's treatment of a character with Down syndrome.
SPOILER ALERT: Becky, a student with Down syndrome, brought her father's gun to school. Earlier in the episode, she expressed fear about her life after high school. The gun fired accidentally and Becky's classmates don't know what really happened because cheerleading coach Sue Sylvester took the blame. As a result, Sue was fired from the school.
That's the short summary. Read Entertainment Weekly's full recap here.
Anyway, as I monitored Twitter throughout the show, I noticed a growing pool of tweets from people who shared an opinion: By making Becky the one with the gun, "Glee" reinforced a belief that people with Down syndrome aren't normal. Some sample tweets:
Lauren Potter, the actress who plays Becky, talked to the Huffington Post about the controversy surrounding her role on the episode. The plot didn't make her appear less human, the actress suggests.
"Whether she has Down syndrome or not, it doesn't matter ... Why wouldn't it be somebody with Down syndrome because she's a kid. She's a teenager. She makes stupid decisions just like other teenagers do," she told the Huffington Post.
She's right.A similar controversy surrounded the "Extra Large Medium" episode of "Family Guy." People got mad that a female character with Down syndrome was bossy. They argued her dominant, demanding personality hurt public perception of Down syndrome.
Obviously, it's wrong to depict people with Down syndrome as social monsters. But it's also wrong to only depict them in the angelic manner at the opposite end of the spectrum. Like everyone else, they aren't 100 percent evil. They aren't 100 percent good, either.
They're human. Being human includes making mistakes.
Sure, I understand there's a difference between cheating on an algebra exam and bringing a gun to school. Maybe "Glee" didn't make the the best decision in choosing Becky as the one with the gun. That's one of the risks a show takes when it includes only one character with Down syndrome. His or her actions will inevitably be dissected as reflections of an entire population.
If ditzy blonde cheerleader Brittany brought the gun to school, would women be offended? If Blaine brought the gun to school, would people say "Glee" set back the gay rights movement?
I don't know.
The faces behind horrific acts of violence are simultaneously human and inhuman. Their actions mark a breaking point few of us can imagine. But emotions fueling those actions are sometimes shared.
It makes us wonder: How much would it take for me to crack?
Sadly, we can't predict the answer -- or anyone else's.
Read more here: http://www.ledger-enquirer.com/2013/04/12/2461059/was-glee-school-shooting-episode.html#storylink=cpy

TV Show ‘Glee’ Depicts School Shooting
by Arlette Saenz from ABC News:
Less than four months since 20 children and six educators were gunned down at Sandy Hook Elementary School, the television show “Glee” depicted a school shooting in Thursday night’s episode.
The episode, titled “Shooting Star,” began with a disclaimer reading, “This episode of ‘Glee’ addresses the topic of school violence. Viewer discretion is advised.”
Halfway through the episode, Will Schuester, the glee club coach played by Matthew Morrison, gathered his students in the choir room to begin their practice.
“Let’s get started,” he said, clapping his hands together as a gunshot was heard in the background. A second shot rang out and Schuester and a coach ran to shut the door to the choir room. They quickly moved students to secure spots in the classroom, hiding them behind speakers or in far corners.
“Start texting, tweeting, let everyone know what’s going on but don’t tell them we’re here. Alright?  Shooters have smart moves too,” Schuester said to the teenagers.
“I love you guys,” he told them.
For ten harrowing minutes, the students and two teachers were trapped in the classroom, sending texts to their loved ones and filming videos of each other in case they didn’t survive.  One student tried to leave the room when he realized his girlfriend was missing, but the teachers restrained him before he can leave.
In a different scene, one cheerleader stood atop a toilet in case the shooter tried to enter the restroom.  She and two other students were eventually rescued by Schuester, and the SWAT team rescued the students trapped in the choir room.
“I’ll never forget the look on their faces when that gun went off.  Something was taken from them. Their innocence, their idealism, their feeling of safety,” Schuester later said as he watched students pass through metal detectors set up at the high school following the shooting.
Sue Sylvester, the cheerleading coach played by Jane Lynch, eventually turned herself into the school principal, saying she accidentally shot the gun, which she kept in a safe at school to protect herself and students in light of recent gun crimes.
“It’s registered.  I have a license for it.  I’m sorry, but in light of recent events, I feel more safe with it in my office,” Sylvester said. “It’s a different world from when you and I started teaching…the safety net of the public mental health system is gone. Parents with troubled kids are too busy working three jobs to look after them. And the gun yahoos have everyone so worked up about Obama taking away their guns has a readily available arsenal.”
But as the show ended, Sylvester revealed to the viewer that the gun actually belonged to Becky Jackson, a teenage girl with Down syndrome played by Lauren Potter.
“I was scared coach, about graduating, being out in the world. With no one to protect me,” Becky said as she showed Sylvester a gun she had brought to school. “I wanted to be prepared and protect myself.  I need help.”
“It’s my dad’s.  I wanted to be ready,” Becky said.  As Sylvester tried to convince her to hand over the firearm, Becky accidentally shot the gun twice, setting off the series of events highlighted in the episode.
Ahead of the “Glee’s” airing, the Newtown Action Alliance sent an e-mail Thursday with a warning from a Newtown organization about the sensitive nature of the “Glee” episode.
“I would suggest if you do watch this TV show to either not watch it tonight or watch with caution,” the message read.
Ryan Murphy, the co-creator of “Glee,” tweeted last week that he was excited about the episode.
“Just saw the rough cut of next week’s “Shooting Star”. It is the most powerful emotional Glee ever. So proud of the cast & crew,” Murphy tweeted last week.
Posted by DSD at 2:29 PM