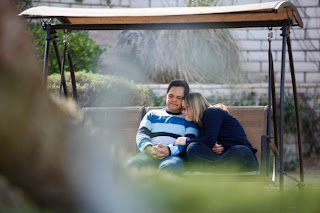 by Sonya Padgett from The San Francisco Chronicle:

The way Michelle Desrochers looks at her boyfriend and then places her hand in his, you can tell she adores him.
He understands her, Desrochers, 24, says of Carlos Sierra. He treats her with respect and kindness, opens doors for her and even finishes her sentences.
They are wildly in love. They plan to marry. First, though, they must both complete couples counseling and life skills training, which will teach them how to be in a relationship and how to live independently.
Sierra, 29, and Desrochers have Down syndrome, a genetic disorder caused by the presence of an extra chromosome.
Those born with the syndrome experience mild to moderate intellectual disabilities and delayed physical development. Many suffer from heart problems and other health conditions that can shorten their life expectancy. According to the National Institutes of Health, about 6,000 babies in the U.S. are born every year with the condition.
March 21 was World Down Syndrome Day, observed to help raise awareness of people with Down syndrome and the challenges they face, including a society that may not realize they are people who have hopes, dreams and desires.
If there is one thing Desrochers' mother, Barbara, would want people to know, it's that those with Down syndrome are capable of many things. They can live full, happy lives and even have successful relationships.
Her daughter and Sierra are good examples of that.
The young lovers met in 2009 at a gala celebrating Best Buddies of Southern Nevada, an organization that pairs volunteers with people who have developmental disabilities.
For Sierra, it was love at first sight.
"I never saw a pretty girl like her. I was happy about that," he told the Las Vegas Review-Journal (http://bit.ly/162Qluv).
It took a little longer for Desrochers to fall in love. That happened during the first date a few weeks later, when they went to see "Mystere" at Treasure Island. Sierra opened the door for her. He was gentle, kind and respectful. He is also handsome, with dark hair and eyes, and he's a crooner. "Fly Me to the Moon" is his favorite song to sing.
What's not to love?
"When I met him, he was so polite, he opened the door for me. He's a great guy who I'm in love with. He really understands me inside and out," Desrochers says.
For the past few months, they have spent weekends together, hanging out at Desrochers' house and learning what it means for them to be independent.
Currently, there are no local facilities where the couple could live after getting married, Barbara Desrochers says. She would like to open a home where couples like her daughter and Sierra could live independently, with minimal supervision. A past president of the Down Syndrome Organization of Southern Nevada, she is using her contacts and resources to figure out how to establish such a home.
"Other cities have them," Barbara Desrochers says.
In many ways, they are like any typical couple: They talk on the phone, go on dates, play Nintendo Wii together. They even share an employer: Coffee Bean & Tea Leaf.
Sierra is front-of-the-house ambassador at the Planet Hollywood Resort location. He's there to make sure the seating area is maintained. He makes drinks with supervision, hands out Wi-Fi codes to customers and answers the phone.
For the past four years, Desrochers has worked in The District at Green Valley Ranch location, washing dishes, cleaning tables, making blended drinks and doing anything else her manager asks.
Their parents credit their jobs with helping them grow and develop new skills.
Both Sierra and Desrochers have made significant progress in their jobs and are admired and loved by staff, says Jeff Fine, owner of the Lev Restaurant Group.
Fine, who grew up in Las Vegas and has operated his company here for 12 years, has always believed in supporting the local community. But when his own son, Levin, was born with Down syndrome four years ago, he refocused those charitable efforts on helping people with developmental disabilities.
It gives them a steady paycheck and a sense of responsibility, Fine says. But it also exposes the public to people with Down syndrome and shows that they are important members of society.
"As great as it is for Michelle and Carlos, it is as important or more important that we are really educating and exposing hundreds of people to people with disabilities," Fine says. "I think it's just a great experience for everybody. I think we're paving the way for having more people in the community educated about what Down syndrome is and what intellectual disabilities are and how the people are affected by them. And I think it helps make the community more warm and accepting."
Their co-workers are excited about their impending nuptials, says Sierra's boss, Allen Zuckerman. But a wedding date has not been set, yet. That will come in due time, Sierra says.
"I'm excited I am engaged with her because I love her," Sierra says. "She is the best girl, ever."
___
Information from: Las Vegas Review-Journal, http://www.lvrj.com
Posted by DSD at 5:00 AM