Family Sues After Seeing Altered, 'Offensive' Images of Son with Down Syndrome 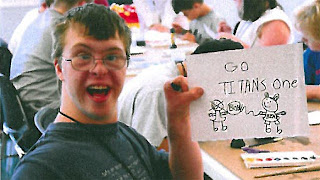 by Susanna Kim from ABC News:
A Nashville family is suing Cox Media and other defendants after they posted altered images of their son with Down syndrome with descriptions that read "Retarded News" and other "offensive" mischaracterizations.
Pamela and Bernard Holland are parents of Adam, who was diagnosed with Down syndrome at birth. The suit, filed with the U.S. District Court for the Middle District of Tennessee, claims the the Hollands were shocked to learn that an image of Adam taken in July 2004, when he was 17, was used for commercial use with "defamatory" descriptions, the Hollands' lawsuit states.
Pamela Holland declined to comment to ABC News on the suit.
In the original photo, Adam is holding a sketch he created while attending an art class at the Vanderbilt Kennedy Center in Nashville. But a radio station in Tampa, Fla., that is owned by Cox Media Group, WHPT-FM, used the image on its website in which Adam holds a sign that reads "Retarded News."
The lawsuit does not describe how the radio station obtained the image.
Last summer, the group "Spread the Word to End the Word," which campaigns to end the use of the word "retard" to describe people with mental disabilities, contacted the radio station about the photo.
The program director of the radio station wrote an email to the campaign, apologizing for the use of the photo by "The Cowhead Show."

The Holland family of Nashville, Tenn. are suing Cox Media for altering an image of their son, Adam, on the website of one of its radio stations.
"The segment 'Retarded News' is designed to highlight odd stories that are seemingly always in the news," according to the email that was included in the court papers.
"These stories are NOT about disabled individuals. However, in our investigation, we noted the picture that he was using did denote a person with Down syndrome," the program director wrote.
Andy McDill, director of communications of Cox Media Group headquartered in Atlanta, told ABC News the company was looking into the matter but could not comment on ongoing litigation.
The lawsuit also claims a web sign-generating company, Sign Generator, also used his image under the heading "Retarded Handicap Generator." In place of Adam's sketch, he is seen holding a sign that read, "I Love Making Custom Signs."
The Hollands say posting these "unauthorized, deceptive, false, misleading and defamatory images of Adam Holland were intentional, deliberate and malicious," causing "severe mental anguish and emotional distress with manifestations that impact their daily lives and routines, humiliation, embarrassment, fear, and other non-economic damages and also their economic damages."
The lawsuit names, Dave Brown, owner and chief executive officer of Sign Generator, as a defendant.
The suit also names as a defendant a user in Minnesota of photo sharing site Flickr. On that site, Adam is shown holding a sign that reads, "I got a boner."
In the comments, the user boasts of the number of views of the photo, saying it is "just a stupid photo of the sick retarded kid that lives down my street that my dogs hate."
Brown and the Flickr user could not be reached for comment.

More from WBTV 3 from Julia Bruck:
WBTV 3 News, Weather, Sports, and Traffic for Charlotte, NC
Posted by DSD at 6:00 AM