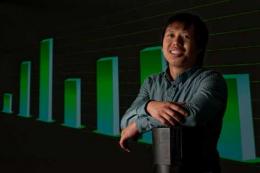 from physorg.com:
When the statistician for UC Irvine’s innovative Down syndrome program retired last year, its researchers were left in a bind. The group is studying ways to prevent or delay the onset of Alzheimer’s-type dementia in people with Down syndrome, including examining possible links between seizures and cognitive decline.
“We were mid-study when we found ourselves with no statistician and little budget with which to pay one,” explains program manager Eric Doran.

Statistical analysis for the project was critical and especially difficult. Some of the subjects’ dementia had progressed to the point that they could no longer be tested on performance-based cognitive measures. They couldn’t respond to questions, making it hard for clinicians to evaluate them. But that resulted in missing data. How, then, could the team accurately quantify change over time and see whether seizures might play a role?

Enter Vinh Nguyen, then a doctoral student in statistics at the Donald Bren School of Information & Computer Sciences and now the new head of the UCI Center for Statistical Consulting, which aims to help researchers across campus and Orange County with such challenges. He proposed a model to gauge how quickly people were becoming untestable, instead of how fast they declined. Rather than including test scores – which would have been zero for those who couldn’t be quizzed – Nguyen designed a variable to show when they became unable to respond.

“My part of it was to help them find a way to look at patients with and without seizures, to see if those with seizures might have a shorter time before they became untestable,” he says. “That’s what we found.”Although the findings are preliminary, without his involvement they wouldn’t have been possible. The work resulted in a paper that has been accepted for publication in the Journal of Alzheimer’s Disease. Nguyen, as of October an assistant professor-in-residence of statistics, is a co-author.

“We’re very fortunate to have Vinh’s assistance,” Doran says. “Quite frankly, some of the statistical analysis he’s doing goes well beyond the skill level of even the most seasoned investigators. Vinh was able to pick up where our previous statistician left off, and he was pretty ingenious. His creative look at the data enabled us to complete our analysis.”


Nguyen was glad to help: “I’m excited to be involved in studies that not only advance science but also make a meaningful impact in people’s lives.”
He looks forward to doing more such work through the center, providing state-of-the-art statistical expertise in grant preparation, the design of studies and experiments, and data analysis. The center this spring will offer free statistical consulting for campus researchers via a course taught by Dr. Nguyen. Graduate students in the class will be assigned to projects based on their interests and skills.

“It’s a huge benefit to the university because it’s free, and it’s a huge benefit to the statistics graduate program because it gives our master’s and Ph.D. students a chance to exercise their knowledge and training in real-world applications,” Nguyen says. “Learning how to communicate, how to collaborate with folks outside your field – you can’t just lecture about that.

It’s got to be a hands-on experience.”

“It’s a big set of responsibilities for someone so young, but he’s got the ability and maturity level to succeed,” says associate professor of statistics Dan Gillen, who directs statistics research at the Institute for Memory Impairments & Neurological Disorders. It was Gillen who introduced Nguyen, whom he was advising on his doctoral thesis, to the Down syndrome team. “Vinh understands the role of statistics across multiple branches of science, and he’s extremely good at translating a seemingly vague hypothesis into a precise statistical framework.”

“I feel very fortunate to be here,” Nguyen says. “I’m honored to be given this opportunity to lead the center and help it grow, and to work in a field and a setting that allow me to apply my knowledge.”
Posted by Rick at 5:47 PM