the 5K Fun Run and Dash for Down Syndrome 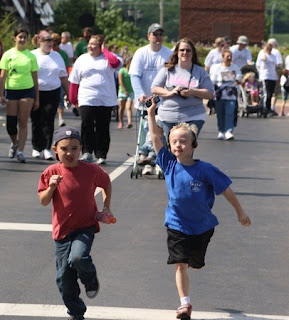 When Nancy Gianni, the founder of Down Syndrome awareness center Gigi’s Playhouse and her busy team of volunteers first organized the 5k Fun Run and Dash for Down Syndrome in 2003, they had no idea of the success it would lead to.

“This keeps getting bigger every year,” an energized and excited Gianni said over the microphone from the main stage to the cheering volunteers, walkers, runners and dashers that packed the parking lots of the South Barrington’s Arboretum on Sunday, June 12..  “We have more than 2,200 participants this year, and that is awesome; but let’s try for 3,000 (participants) next year!”

If the cheering from the audience was any indication, than three thousand walkers and runners in next year’s event sounds about right.

“We are incorporating five different Playhouses from all around the Chicagoland area into this event,” Jenni Von Tobel executive director for Gigi’s Playhouse said of just some of the different walking teams that came out in support of Down syndrome awareness.  “And all the money we raise goes straight into programming.”

The funds from the eighth annual event will not only help support the continued growth of the different Playhouses in operation, but also the 26 different therapeutic and educational programs that is offered to children with Down Syndrome at each Playhouse location.

“The proceeds will help our reading program and the newly piloted math program,” Gianni said.  “We provide one-on-one tutoring in reading and math, our two biggest programs, and that really helps the kids in school.”

Gigi’s Playhouse, which first began in Hoffman Estates, has seen some exciting growth since its inception in Gianni’s basement eight years ago.  Not only did they begin an annual event that brings tremendous support from the community and local businesses to help the center’s fight for awareness of Down Syndrome, but the Playhouse has grown to nine locations scattered throughout the Illinois and even the United States. Gianni says there is even more growth on the horizon.

“We are going international this year,” Gianni said.  “Our tenth location will open in Mexico.”
Both Gianni and Von Tobel credit the growth of the event, and the various Gigi’s Playhouses, to the amazing effort from the community.

“Volunteers are at the heart of what we do,” Von Tobel said of the more than 200 volunteers that work with the different programs in the Chicagoland area.  “We had about 125 volunteers that have been here since 5:30 this morning.”

“The volunteers have done everything, and we couldn’t have done this event without them,” Gianni said agreeing with Von Tobel.  “This event has been fantastic and everything went off without any issues.”
The inspiration for the 5k Fun Run came from a mother that hoped to enter a marathon race with her daughter, who is afflicted with Down Syndrome.  but was unsure if she would be able to.  Gigi’s Playhouse helped make that dream come true for the mother by instilling self-esteem and easing some of the fears associated with Down Syndrome.  Gianni and Gigi’s Playhouse decided to host the 5k run that has now become an annual event.

“Our kids can walk; they can run; they can do anything,” says Gianni, who knows a little something about being inspired; after all her daughter Gigi has the genetic disease and is the inspiration behind the Playhouse.  “So we decided to have this walk to show people that our kids can do everything other kids can do.”

Perhaps it seems that one of the most important things children with Down Syndrome can do, is inspire.  They have inspired a Playhouse, an event and now a community to action.
Posted by Rick at 8:03 AM