Spread the word to end the word.

Spread the Word to End the Word is an on-going effort to raise the consciousness of society about the dehumanizing and hurtful effects of the word "retard(ed)" and encourage people to pledge to stop using the R-word. The campaign is intended to get schools, communities and organizations to rally and pledge their support.

Why does it hurt? The R-word hurts because it is exclusive. It’s offensive. It’s derogatory. The R-word is hate speech.


This word is used way too often in casual conversations and it has to stop.
Fore example the r-word was used over 38,000 times on 2/25 on the internet. 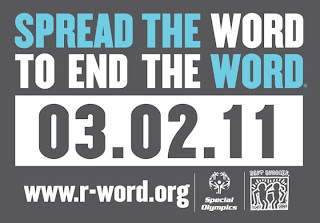 Email ThisBlogThis!Share to TwitterShare to FacebookShare to Pinterest
Labels: R-word