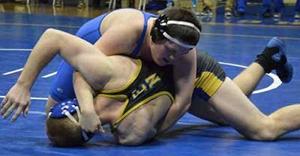 By Kassie Barroquillo from KPC News.com:KENDALLVILLE — Despite losing to Columbia City, 40-29, Wednesday, East Noble ended its senior night with a cheering crowd, a trophy, and an excited team — all thanks to a wrestler who has become the heart of the squad.
Senior John Herron pinned fellow senior Jake Weimer in an exhibition match immediately following the end of the Knights’ varsity meet. He has been on the wrestling team for three years. Herron has been the recipient of the team spirit award for the past two years; he is always one of the loudest people cheering for his teammates; and he has Down Syndrome.“He’s got all of the qualities everybody wants. He’s so supportive of us,” said EN coach Keith Hoffar. “It has been a privilege and I think the kids think so too.”
Assistant coach Ryan Pepple, who planned the exhibition match, said, “I wanted to give him the same experience as his teammates.”
Although Herron wrestles once a week with the team, this was the first time he had wrestled in front of a crowd at a match. His fellow seniors awarded him with a trophy afterward and the entire team lined up to offer hugs and high fives.
Herron’s favorite part of the night: “Pinning Jake!”
“Jake (Weimer) is the the same weight class as John. I knew Jake, which his experience, could keep them both safe,” said Pepple.
Herron’s mother, Natalie, said that wrestling has been a good experience for John. “He just loves it and he loves everybody. I think it really boosts his confidence.”
“He brings us back. We’ve got a lot of kids that are good and good wrestlers, but they are so good with him,” said Coach Hoffar. “The coaches are there, but it is the kids that teach him how to wrestle.”
While Weimer gave up the pin to Herron, he did pick up his own pin at 170 against Columbia City’s Jacob Morse during the third period of his varsity match.
Four out of the five seniors wrestling varsity walked away from senior night with wins. Joining Weimer with a pin was Riley Jones (145). Garrett Pepple (113) earned a technical fall against his opponent and Connor Knapp (132) defeated Kyle Egolf, 1-0, with a third period escape. Alex Pashea (152) lost 14-6.
“We had some good battles,” said Hoffar. “At 132, the difference in the match was our ability to look for the fall and ride the entire period.”
Also earning wins for the Knights were Jon-Matthew Spaw (106), Seth Ferrier (126) and Trevor Rainey (160).
East Noble gave up two pins, two forfeits, one major decision, and one minor decision to the Eagles.
“We gave up falls in places you can’t give up falls. You can’t do that in a dual meet setting,” said Hoffar.
The Knights host the East Noble Invite on Saturday, beginning at 9 a.m.
Posted by DSD at 7:00 AM