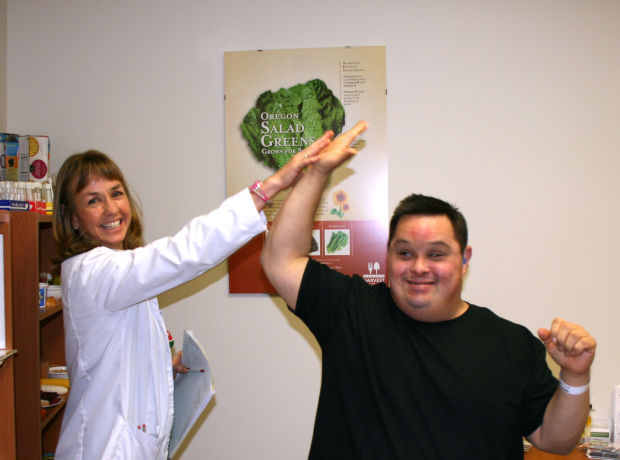 from TheWorldLink.com:
Want to lose weight this year? Take some advice from Coos Bay’s Gregory Crew.
Eat less. Exercise more.
And no grilled cheese for breakfast.
Following that simple regimen, Greg lost 60 pounds in five months. And he’s just getting started.
Greg, 37, has Down syndrome. It’s a genetic disorder that causes lifelong intellectual disability and, in some cases, chronic health problems. He’s a cheerful soul who loves board games, Power Rangers movies and karaoke. He’s a former Special Olympian.
But pneumonia put him the hospital for a week last year. He has relied on an oxygen tank since then, and last summer Greg’s doctor delivered a life-changing verdict. At 5-foot-3 and 283 pounds, Greg had to shed some weight if he hoped to be healthy.
Linda Devereux soon became a prominent figure in Greg’s life.
Devereux, a clinical dietitian at Bay Area Hospital, provides nutritional counseling to patients with diabetes, heart disease and other problems related to obesity. But don’t ask her to put you on a diet.
“I don’t provide diets, because diets don’t work,” Devereux says. “A diet is something you go on and off of.”
Instead, Devereux preaches long-term lifestyle change. Nothing radical – just healthy choices, smaller portions, and routine physical activity.
“We’re not perfect people,” she says. “But life is made up of small choices. What will I eat for lunch? Will I walk on my break?
“The small choices and small changes can add up to significant changes.”
Devereux looks for slow, steady weight loss – one to two pounds per week.
“We set small, reachable goals that they can succeed at,” she says.
Greg’s weight loss has been impressive, averaging nearly three pounds a week. Yet his progress hasn’t required extraordinary sacrifice.
Greg meets with Devereux every couple of weeks. During a typical 15-minute appointment, she talks with Greg and his mom about what he’s been eating and how much he has been exercising.
Visiting Devereux in late December, Greg reports that his standard breakfast is a bowl of instant oatmeal and one slice of toast. Grilled-cheese sandwiches, formerly his favorite way to start the day, are history.
He drinks water now instead of Gatorade. Baked chicken has replaced fried, and he eats lots of salad. Sweets are rare. He likes pizza, but two slices are his limit.
Devereux asks about exercise. Greg’s mother, Frances Williams, reports that Greg has progressed from three to four trips down their long, rural driveway each day. He frequently rides an exercise bike at his sister’s nearby home. He does sit-ups.
It all seems to be working. Devereux’s target for Greg on this late-December visit is 225 pounds. The digital scale in her office reads a triumphant 223 – prompting hugs and high fives all around.
Greg’s next goal? Williams says she hopes to see her son below 200 pounds. Devereux declines to name a number, offering a longer-term goal instead:
“Not gain it back,” she says.
To meet that objective, Greg’s short-term achievements need to become permanent lifestyle changes. For anyone who loses weight in 2015, that’s the ideal outcome.
Posted by DSD at 7:00 AM