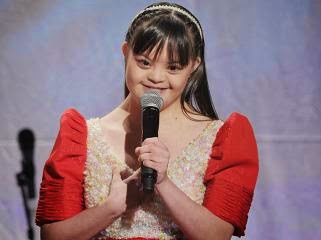 from GMA News Online:
A Filipina teenager was given an opportunity to step inside the White House on Thursday (Friday in Manila) for a state dinner hosted by US President Barack Obama and wife Michelle for the participants for the Special Olympics Global Youth Activation Summit.

Brina Kei Maxino is the first Filipina to represent the Asia Pacific region at the summit and is the first teenager with Down Syndrome to have that distinction.

The year-long summit would be in preparation for the 2015 Special Olympics World Summer Games to be held in Los Angeles, California.

Not only Maxino was able to dine with the Obamas, she was also mentioned by the US president in his speech.

"Today, in more than 170 countries, Special Olympians are athletes of all kinds — skiers and speed skaters, sailors, cyclists, equestrians and judo masters. They make extraordinary contributions to their communities. And I’m proud to highlight a few of them here tonight," Obama said.

"Brina Kei Maxino represented the Asia-Pacific region at the Special Olympics Global Youth Activation Summit when she was 16 years old. She was the first Filipina and the first teenager with Down Syndrome to do that so let’s give Brina a big round of applause. Yay, Brina!" he added.

Maxino was also given a chance to introduce pop star Katy Perry as the performer for the state dinner.

The dinner event, dubbed “Special Olympics and A Unified Generation," gathered past and current athletes, volunteers as well as the supporters of the Special Olympics movement, which was founded in 1968 by the late Eunice Kennedy Shriver, sister of the late US President John F. Kennedy.

According to the website of Special Olympics organization, Maxino possessed “above average communication skills” compared to other people her age with Down Syndrome.

“Brina’s abilities and skills today have surpassed the expectations of doctors and therapists, who had very low expectations for Brina soon after she was born. Years later, a psychologist told Brina's parents that their daughter would find it hard simply to finish elementary school,” it added.

In 2013, Maxino graduated from a mainstream high school at the appropriate age of 16. For over a year, she worked part-time as office assistant in her former grade school with competent computer skills.

She is now taking AB History in a university. Maximo is also an active member of the Down Syndrome Association of the Philippines (DSAPI) delivering inspirational talks.

“People who know Brina say her dynamic personality will no doubt contribute to energy at the Global Youth Activation Summit. They wish her -- and all the delegates at this year's GYAS event – the best of everything at this important time!,” the Special Olympics website said. —Elizabeth Marcelo/KBK, GMA News
Posted by DSD at 10:00 PM