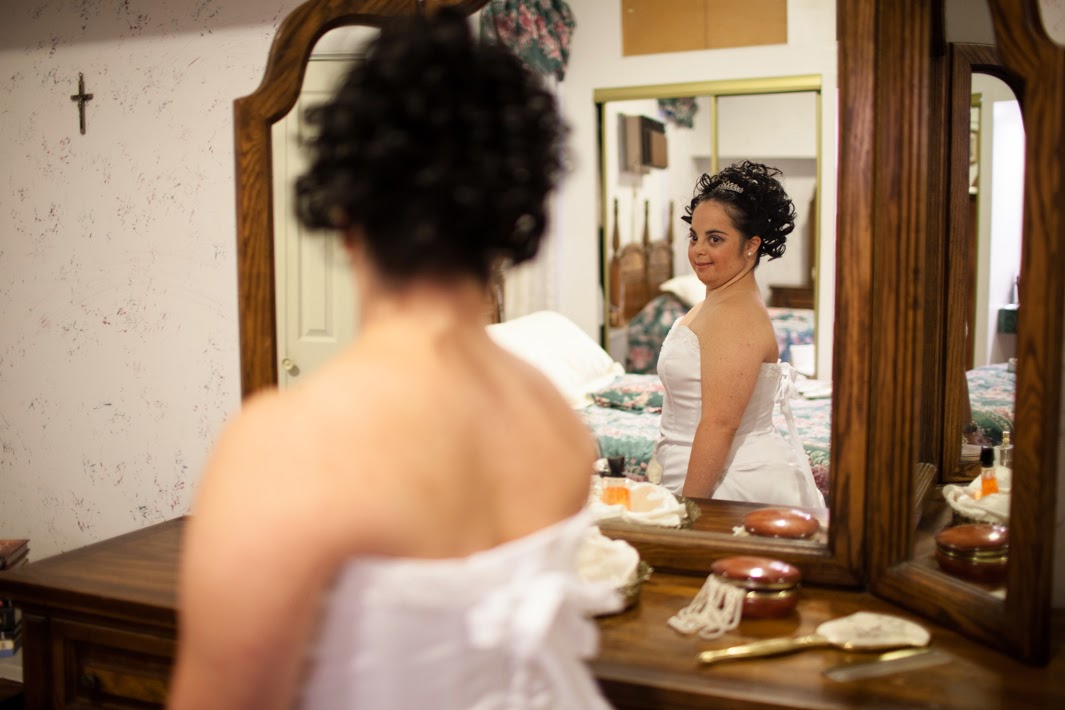 by David Rosenberg from Slate.com:
When Janice Di Joseph and photographer Lindsay Morris sat next to one another on a train, the two women struck up a lively conversation. Morris said she was drawn in by Di Joseph’s extrovert personality, but it was her daughter Ricchina who immediately caught Morris’ eye.
“She was so dreamy,” Morris recalled. “She had this air about her that was so soft and warm and welcoming.”
Morris was returning from the Look3 photo festival in Charlottesville, Virginia, and had felt empowered by a seminar she took on the photography essay. When Di Joseph, who was heading to Philadelphia where she lives, mentioned she was preparing to throw a surprise wedding-themed birthday party for Ricchina, Morris offered to photograph it and created a series, “Ricchina’s Wedding.”

Ricchina has Down syndrome and as she and Di Joseph began to attend more weddings over the years, Ricchina began to question her mother about why she wasn’t able to get married.
“I would die whenever she asked, because I didn’t know what to say,” Di Joseph said.
Thanks to Di Joseph’s never-take-no-for-an-answer attitude, Ricchina had already met two of her idols, Justin Timberlake and Lance Bass, encounters Di Joseph felt certain would be the highlights of Ricchina’s life. But as it turned out, the wedding-themed birthday party would top both of those.

“When it comes to Ricchina, I just look straight ahead and whatever she wants, I make it happen,” Janice said.

For Morris, photographing the party was another opportunity for her to create personal and intimate stories told through photography.
She is currently in the process of publishing a book, You Are You about a camp for gender variant children, covered in Slate last year, and said although she hasn’t always considered herself to be the most confident person, photographing events like Ricchina’s birthday has changed that.
“Exploring your fellow human being’s experience takes a lot of confidence,” she said of her work about Ricchina and “You are You.” “I’m attempting to show respect for another person, to show families and friends celebrating diversity … it’s a unique person being celebrated in a different scenario.”

Morris added that she often enters a zone while working behind the camera and feels she has further developed a style that is rooted in her making other people feel comfortable. She feels photography is a great vehicle for sharing other people’s experiences.
“People have extreme discomfort with people who don’t conform to our expectations of normal,” she said. “I think photography gives us the opportunity to tell a story compassionately and gives a glimpse into a world they’re unaccustomed to seeing.”
As for Ricchina, she and Di Joseph simply love looking at the images Morris took.
“I can’t stop looking at the pictures,” Di Joseph said. “It was just magnificent … she [Ricchina] talks about it all the time and she relives that moment and I can’t ever get anything better than that, it’s just priceless.”
Posted by DSD at 10:58 AM