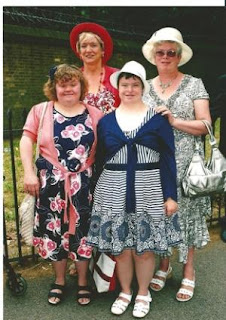 Two women from Bewdley, UK who set up a home and adopted four children with Down’s Syndrome attended one of the Queen’s garden parties in recognition of their work.

Heather Trew, 60 and Rosie Allen, 62 were surprised with letters inviting them to Buckingham Palace for their service to children and families. The pair have spent more than 35 years caring for the disabled children they created a home for.

The friends met while working as residential social workers at the former Barnardo's home in Spennells more than 35 years ago.

At the time, the charity had an advert in The Shuttle asking for a foster home for four-year-old Caroline who had Down syndrome.

When no one came forward, the friends felt it was their calling to help the little girl - even though it meant leaving their jobs and moving in together to be able to foster and later adopt her.

Miss Allen said: “I became a Christian while working at Barnardo's and we both felt we were led to do this. We were advised that we would not be able to adopt from Barnardo's while we were still working there so we left. In those days it was unusual for two women to adopt but it helped that they knew us and knew we were Christians.”

Miss Allen became a caterer at what was then The Elms and Miss Trew became a special needs teacher at Blakebrook School.

In 1981, while going through the adoption process with Caroline, who is now 39, they heard of baby Debbie, now 31 who was in need of a home and Miss Allen gave up work to become a full time mother.

Four years later, they welcomed Katie, now 27 into the family and Richard, now 24 joined them in 1988. All of the children’s names were changed by deed poll to Allen-Trew.

Miss Trew said: “Once we had done it for one you think there are other children out there so we ended up with four.”

She added: “I think Caroline would have spent her life in a children’s home and it wasn’t the right environment. I think all children deserve a family and although we are two women we have tried to create a family identity. Even though some have health problems and behavioural problems that’s part of family life and they have given us a lot more than we have given them.”

The mothers and their two eldest daughters attended a garden party at Buckingham Palace on Tuesday, July 12. They passed through state rooms before taking tea in the garden along with about 8,000 invited guests. After taking tea in a big tent they joined two long rows and the Queen and Prince Philip passed along one each.

Miss Trew said: “We were about six feet away from the Queen. She was in lemon and was on her feet for a good couple of hours talking to people in the Royal tea tent and in the line. It was remarkable stamina for a woman of 85.”

She added: “It was very moving. The girls found it fascinating. They realised it was a great honour. There were about 8,000 people there so it was a big affair but because they could nearly touch the Queen they were very excited.”
Posted by Rick at 8:00 AM