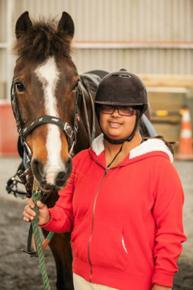 from Indian Weekender, IWK Bureau:
The 36 Special Olympics New Zealand athletes and 17 volunteers taking part in the Special Olympics World Summer Games 2015 in Los Angeles, are set to depart for the competition in just a couple of weeks.
Amongst them is Special Olympics North Harbour athlete Pratima Patel, who is the first New Zealand athlete of Indian origin ever to compete at the Special Olympics World Summer Games.
The Special Olympics World Summer Games 2015, known as “LA2015”, will see 7000 athletes from 170 countries compete at the event being held from 25 July 2015 to 2 August 2015. The New Zealand delegation includes 34 athletes with intellectual disabilities, two ‘Unified Partners’ (athletes without an intellectual disability), and 17 coaches, managers and support staff. The athletes will compete in aquatics, athletics, basketball, bocce, equestrian, golf, powerlifting, and tenpin bowling.
Pratima, who has Down syndrome, will be competing in equestrian, but she’s also involved in basketball, swimming and snow sports at Special Olympics North Harbour.
“Pratima got into Special Olympics about ten years ago and has never looked back,” says her Mum Jamna Patel. “It’s given her so much confidence and the opportunity to make friends and compete in sports she never would otherwise have been able to.”
Pratima will be joined by family members in Los Angeles. Since being selected to compete she has been supported by the community in fundraising for the event. Curves Birkenhead and the local Indian community have also been fundraising for the event and to help support Pratima’s ongoing training.
“It’s a real dream come true for Pratima. She’s had a love of horses since she was a young girl, so to be competing in an international competition is just amazing.”
Head of Delegation Max Brooking said the group of athletes qualified for the World Summer Games at the Special Olympics New Zealand National Games in 2013 and each athlete has been working hard to put in a top performance in LA.
“Our training goal has always been to get all of the athletes prepared to a point that they can achieve a personal best performance at the Games,” Max says.
“With the support of our excellent coaches and management our athletes have been very dedicated to their training and are looking forward to competing on the international stage. I’m sure they will all return with renewed confidence and new goals for the future.”
This week is Special Olympics New Zealand’s first ever Awareness Week. Text GIVE to 2449 to donate $3 to Special Olympics New Zealand or visit www.specialolympics.org.nz
Posted by DSD at 6:00 AM