Princess Diana and her godchild Domenica

Princess Diana would be thrilled to have a granddaughter, according to her close friend Rosa Monckton. Shortly after hearing the news that Prince William and Kate Middleton, had welcomed a baby girl, the British businesswoman and campaigner took to Twitter to say how much her late friend would have loved the new arrival.

"How Diana would have loved a grand daughter," she simply wrote to her 2,280 followers.

How Diana would have loved a grand daughter.
— Rosa Monckton (@MoncktonR) May 2, 2015


The 61-year-old, who was the CEO of Asprey & Garrard until 2002, went on to retweet and respond to those who agreed with her on the social media site.

Rosa also uploaded a photo her daughter Domenica Lawson, who has Down's Syndrome, and who Diana was a devoted godmother to until her death in 1997. 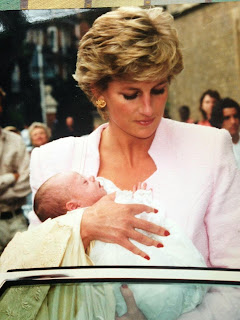 Here is Diana with Domenica. pic.twitter.com/NB1LQGz2vw
— Rosa Monckton (@MoncktonR) May 3, 2015


This is not the first time that Rosa has spoken about the kind of grandmother Diana would have been. Back in July 2013 when William and Kate became parents to Prince George, Rosa wrote a piece for the Daily Mail saying Diana would have "relished the role."
Posted by DSD at 3:47 PM