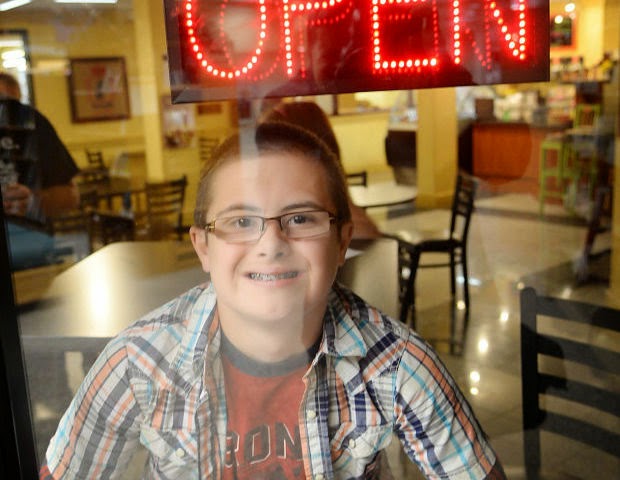 by Karee Magee from The Bismark Tribune:
Sandy and Matt McMerty, like most parents, believe in setting the bar high for their three children in order to see them succeed. But for the McMertys, that meant buying a coffee shop in the Bismarck Public Library for their eldest son.
When Cristian McMerty, 13, was born with Down syndrome, the McMertys wanted to find a way for their son to succeed in life instead of being limited.
“You can set the bar low and reach it, but that’s a lot worse than setting the bar high and giving a person the chance to reach it,” said Sandy McMerty, marketing communication manager at the Department of Commerce.
After stumbling across Tim’s Place in Albuquerque, N.M., the McMertys were inspired.
Tim’s Place is a successful restaurant owned and operated by Tim Harris, a man with Down syndrome, where the slogan is “comfort, food, and hugs.”
“We thought, wouldn’t it be great if we had some type of business we could all run together,” said Matt McMerty, owner of a record management company, Docustore.
Years after deciding on what the McMertys call their “big dream,” they opened The Gifted Bean Coffee House.
The McMertys said they are hoping that if the coffee house works out, Cristian will be able to take over the business.
His parents said that he already wants to start.
“He keeps telling his teachers he can’t come to school today because he has to work,” Matt McMerty said.
The McMertys began speaking with the previous owner at the end of August.
Matt McMerty said he thought it would take about two years before they could purchase the business, but the owner wanted to sell immediately.
“We jumped right in,” he said. “A week ago, I couldn’t spell latte.”
They said the coffee house has been an adventure, but also a learning challenge.
“What if we try and fail?” Sandy McMerty said. “Well, at least we tried.”
Once the coffee house is established, the eventual goal is to provide a supportive working environment for others in the community with “unique talents.”
The McMertys have been active in community organizations for people with disabilities.
Sandy McMerty is one of the organizers of the Buddy Walk as a member of Designer Genes, an organization that provides support, information, education and advocacy to families and people with Down syndrome.
The family also is involved in Family Voices, which supports youths with special health care needs.
Providing future employment for individuals with disabilities is another way for them to support their community.
“We really want to enhance that people with disabilities can do the same things we can do,” Matt McMerty said. “They just do it differently.”
The coffee house is a good opportunity for people with Down syndrome, autism, Asperger’s, and others who require a routine, Sandy McMerty said.
“There’s a lot in a coffee shop that is routine,” she said, including making coffee, baking, and wiping tables.
“I think it’s a wonderful opportunity to provide a nice service for the community,” said Matt McMerty.
The Gifted Bean Coffee House is open from 9 a.m. to 6 p.m. Mondays through Thursdays, 9 a.m. to 4 p.m. Fridays and 10 a.m. to 3 p.m. Saturdays in the Bismarck Public Library.
Posted by DSD at 6:00 AM