high school boy with Down syndrome stands out 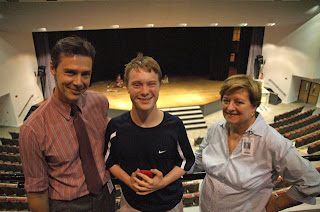 In the uniformed moving mass of about 200 Winter Park High School marching band students, you might not notice Sam Hagan — but that doesn’t mean he doesn’t stand out.

In the afternoon heat, the students practice their marching drill on the high school parking lot, flowing seamlessly — or not-so-seamlessly, depending on the run — together to form unified pictures, only viewable from above.

From this birds-eye view, it’s nearly impossible to pick Sam out from any other band member. But if you look hard enough, you’ll see him front row center.

He nods his head and pulses his drumsticks ever so slightly to the beat of the music as part of the front percussion ensemble, internalizing the pulse, preparing for his cymbal part.

Occasionally he’ll fidget to adjust his large black headphones — the one thing that distinguishes him from the others. He wears them to take the edge off the noise that comes with having a 200-piece marching band performing behind you, his mother Julie said. Having Down syndrome, Sam’s ears are more sensitive to the noise than others.

If he sees you watching too closely during rehearsal, he’ll shoot you a funny face, do a little dance or reach his mallet under his leg to drum his cymbal, until he hears someone shout “Sam!” reeling him back in.

”More alike than different” are the words Sam’s mother, Julie, uses to describe her son, a sophomore this year, in relation to his Winter Park High School peers.

Despite his special needs, Sam is enrolled on a typical high school diploma enrollment track and participates in both marching and symphonic bands, as well as drama.

“It’s really priceless — all the opportunities he’s been given going to school here,” she said. “It’s been such a blessing.”

Sam is shadowed throughout the school day by his paraprofessional aide, Sharon Riley. She takes notes for Sam during lectures, so he can concentrate fully on the lessons being taught, and helps him in any way he needs. The pair has been together since Sam was in sixth grade.

“Sam is just a wonderful kid,” Riley said. “He surprises me every day.”

Riley, a well-known actress in her homeland of Puerto Rico, helps Sam do everything from run his lines for the school play — or “woofs” this year, as he plays the role of the dog in his Drama 2 class production of Susan Zeder’s “Wiley and the Hairy Man” — to introducing him to students in the classroom.

“Sometimes students are apprehensive around Sam; they just may not understand what he has,” she said. “But I encourage them to ask us questions and get to know him. Once they break that barrier, he fits right in.”

He fits in so well, Riley said, that often in classes students will compete to be Sam’s partner during group work.

The two who usually work with Sam in his drama class are Hannah Price and Hannah Rejonis – known as “the Hannahs”. But add in Sam, and they’re known as “The Trio”: Hannah P., Hannah R. and Sam H, his drama teacher, Robert Dutton, said.

“He’s probably the nicest kid you’ll ever meet,” Rejonis, who bonded with Sam over a mutual love of musicals and all things Star Wars, said.

“He’s so caring,” Price added. “He’s always the first person to come over to me if I have my head down or look like I’m having a bad day to ask what’s wrong.”

Dutton said Sam is wonderfully mischievous in class. “He has a delicious sense of humor,” he said. “But he shows a real purpose and desire to be there. I wish more of my other students had that.”

Last year, for his work ethic and ability to not let his disability get in his way, Sam was voted “most inspiring band student” as well as “outstanding freshman band member” by his peers, Dutton said.

“He’s always surprising in a really wonderful way,” he said.


As a teenager with Down syndrome, Sam’s life may not always be easy, his mother said, but he has a great attitude.
His family has been actively involved with the Down Syndrome Association of Central Florida — headquartered in Winter Park — since he was born, which has given Sam numerous volunteer opportunities within the community and a place to socialize with other local kids with disabilities.
DSACF Executive Director Amy Van Bergen said she’s known Sam his whole life and has seen him thrive through the many activities he’s involved in.

Bergen said Sam is someone who both breaks the stereotypes of Down syndrome and proves how active and successful someone with the condition can be. In past years, Sam has qualified for state championships in both cycling and swimming for the Special Olympics.

One of the main characteristics of Down syndrome, she said, is low muscle tone. To combat this, it is important that people with Down syndrome stay active and fit, but also makes doing so considerably harder. The same goes for auditory and visual processing. Both of these traits, she said, make all that Sam has accomplished that much more impressive.

“For him to be on that marching band field, he’s probably working two or three times harder than a typical kid because of Down syndrome,” Bergen said.

Sam said his dream is to go to college at Ohio State University and continue to be in the marching band. He hopes to one day be the sousaphone player who dots the ‘I’ during the bands spell-out of “Ohio” during their pre-game routine. He plans to practice his sousa skills in the stands at football games this season.

“You guys will come watch me, right?” he asked the Hannahs.

Sam erupts in a fit of laughter, the sounds echoing throughout the school auditorium where The Trio hangs out after school. It is a sound his aide would recognize anywhere and one Dutton hears frequently in class. Anyone that knows Sam, his mother said, knows him for that laugh and his great sense of humor.

“Sam is really a great kid,” Julie said. “But it’s really all the great opportunities that he has been given that make him thrive.”